LIMERICK-based magazine ‘Changing Ireland’ marked its 21st anniversary last Monday when Minister of State for Community Development Joe O’Brien visited the Moyross Community Hub where the national publication is based.

Over the years, the magazine has featured community activists from every county – from Erris Head to Wexford Town, Dublin to Derry and everywhere in between.

Minister O’Brien paid tribute to chairperson Shane O’Sullivan, his board and staff for managing and supporting an unique project at a time when it was more important than ever to have trustworthy media.

“‘Changing Ireland’ has a track record in promoting community development, giving marginalised communities and people who are hard to reach a voice, and highlighting positive local and national initiatives. It is also at times critical and that is to be welcomed,” he added.

The Minister was welcomed to Moyross by Shane O’Sullivan, chairperson of Changing Ireland Community Media CLG, the not-for-profit company that publishes the magazine with support from the Minister’s Department and with a small amount of funding earned from social enterprise activities.

Minister O’Brien was shown the bungalow in Sarsfield Gardens where the magazine was based for its first 17 years, before it moved into new offices in Moyross Community Hub.

“Being part of the community has always been core to the ‘Changing Ireland’ project,” said Mr O’Sullivan. “The project is rooted in Moyross and gives as well as receives support locally.”

The magazine currently employs an editor/manager and engages reporters on a freelance basis.

“Our work is underpinned by community development principles and the company is managed by a voluntary board. ‘Changing Ireland’ is now the most popular and longest-established Community and Voluntary Sector magazine published in Ireland. It is a trusted and valued news source,” added Mr O’Sullivan.

Editor Allen Meagher commented: “The magazine was first spoken of in 1999 and, two years later, a community project in Moyross won the national contract and ‘Changing Ireland’ was born.

“Constant negative headlines and stigmatisation which Moyross people face prompted local activists at the time to get behind the project. People needed to hear of the positive initiatives happening nationally in communities around Ireland – including Moyross.”

Among those to have featured in the magazine over the years are Mary Coughlan, Seán Óg Ó hAilpín and Bernadette McAliskey. However, most covers feature ordinary folk doing extraordinary things in communities.

The first edition featured a nun, Sr. Mary Carmel, from Thomondgate, Limerick, disguised as a man as part of a ‘Challenging Stereotypes’ project.

By year’s end, Changing Ireland Community Media CLG is due to complete a strategic plan for the coming years – with part of that vision being to increase the level of news output and improve the publication’s online presence and appeal. 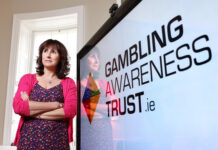