LIMERICK can anticipate strong representation on the PWC All-Stars Hurling Team, which will be unveiled on RTÉ Two tonight from 7pm.

Limerick duo Byrnes and Nash are also in the running for the Player of the Year, as is TJ Reid of Kilkenny.

Since the inception of the scheme in 1971, more than 40 Limerick players have earned All-Star recognition, between them taking home close on 80 Cú Chulainn statuettes. 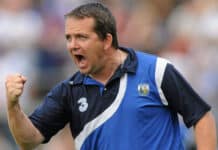