MORE than 1,000 submissions have been received by Limerick City and County Council as part of the Part 8 planning process for the South Circular Road Active Travel Scheme.

A public meeting was also hosted by residents in Mary I, which was attended by more than 100 residents and a number of public representatives.

It is now anticipated that this Part 8 planning application will come before the 21 members of the Metropolitan District of Limerick in early February 2023, where the elected members will have the ability to amend the plan, approve the plan, or reject it outright.

During the public consultation period, more than 1000 submissions were submitted to the planning department from opposing sides, with some submissions submitted from as far away as Navan in support of this scheme.

A number of residents have highlighted serious concerns in relation to the scheme and the significant implications it would have for them and their families.

The plan would involve a significant removal of on-street parking between Fennessy’s Pub and St Alphonsus Street, continuing on down to Henry Street.

City West Fine Gael councillor Dan McSweeney believes that from the outset there has been serious shortcomings in the public consultation process.

“There are some serious concerns being raised by local residents in relation to this scheme and it is important that all their views are listened to.

“We cannot impose a scheme that will have a detrimental impact on their daily lives.”

Cllr McSweeney is also of the view that a lot of misinformation has been circulated suggesting the plan is already a done deal.

“It must be said this not a done deal. The councillors will have the ability to amend or even reject this plan once it come before us early in the new year and I have assured all the residents that I have engaged with that I will work with them to find solutions to the very valid concerns they have raised.”

Councillors tooting for dual rail line from Limerick to Foynes 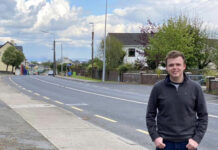