Published by Limerick Writers’ Centre, The Poster, was launched by former Education Minister Jan O’Sullivan, who recalled that Denis edited the centre’s very first publication, Kemmy’s Limerick Miscellany, back in  2019.

“The centre has gone from strength to strength since and incredibly has published no less than 136 books by local writers in that length of time,” she said.

She also touched on a number stories in the book, several of which have local connotations.

“Denis, by his acute observations, has woven several incidents of Limerick’s past into readable, highly enjoyable stories,” she added.

O’Shaughnessy has been writing books about Limerick for the past 25 years. He has been acknowledged as capturing the character and spirit of Limerick, its nuances, pathos, and humour, not least the great characters that once abounded around the city.

The Poster is a departure from the norm, with an eclectic 16 fictional short stories of varying hues, some woven from long-forgotten local incidents, such as a tragic Black and Tan tale, and a doctor who, through his medical clinic, tried to convert Catholic patients to the bible.

Limerick humour comes through in some other stories, including a tale with a character who thought he had a look of Clark Gable about him.

The author thanked all those for the great turnout and the Limerick Writers’ Centre for publishing the book.  He said the support and encouragement of the people of Limerick for his books down the years was the mainstay, culminating in launching this, his tenth publication. 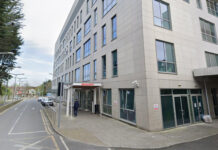 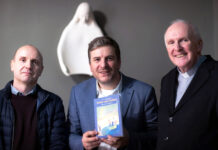