ROBERT Dawson from Castleconnell is a talented young man intent on going places with his guitar.

One of those places was the Three City Stage, a touring platform for rising music stars and buskers that recently hit Limerick’s Cruises Street.

The Three City Stages initiative – in association with Hot Press, AIM Ireland, and Sony Music Ireland – is designed to support the next generation of Irish musicians and to progress their careers to the biggest stages in the country.

Robert (21) who has been singing and writing songs since he was 14, told the Limerick Post it was a surprise to be asked to take part in the touring street extravaganza.

“I usually busk on Cruises Street and I have an Instagram site. Someone from Three saw me and I got a message from them about taking part.”

For his set on the impromptu stage, Robert opened with the Prince classic ‘Purple Rain’ and continued with his raw and emotional new single, “In The First Place”, released earlier this year with all proceeds going to Rape Crisis Mid West.

The song is about abusive relationships. Robert says it comes from his own experience.

“I was fresh out of foster care and met someone on the internet and things were wrong.

“I hope the song might help people who find themselves in that kind of situation to heal and to talk about it, because that can be very difficult, particularly for men.”

The Castleconnell lad says that he hopes to make music and songwriting his career. He is also studying applied psychology at the Limerick College of Further Education.

Speaking of his experience with Three City Stages, he said “they were very supportive in the lead up to the gig and in promotion all over social media”.

His hopes now are for more gigs and a chance to spread his music across the country.

“I don’t have any lined up right now, so all offers gladly accepted,” he says.

Robert’s music is available on Spotify or through his Instagram page, @RobertDawsonMusic 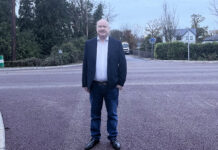