Home Lifestyle Arts Harris back on the big screen again

FEATURE films by Irish directors or those of Irish extraction will be the main attraction at the inaugural Richard Harris International Film Festival.
Set for the weekend of December 6-8 and endorsed by the Harris family, the event organisers hope it will provide an outlet for Hollywood and European film hot shots to promote indigenous industry and job creativity here.

Festival founder Rob Gill, working with Eleanor McSherry and Zeb Moore, gave his programme highlights to the Limerick Post ahead of the media launch in King John’s Castle this Tuesday.

“We have the film ‘GBF’ with Harry Potter actress Evanna Lynch, whose father is from Termonfeckin, Louth. It’s her first big movie since the Harry Potter series. This is a satirical take on teenage film and is just that little bit darker, in the line of ‘Heathers’.

“Then there is ‘Life is a Breeze’ which has Pat Shortt and Fionnuala Flanagan and directed by Lance Daly. This is probably going to be our opening night film.”  Rob Gill references ‘Game of Thrones’ and ‘Love/Hate’ star Aidan Gillen, leading man in the acclaimed ‘Mister John’. A sinister drama made in London, it is by writer-director team Christine Molly and Joe Lawlor.

“Our retrospective film from Richard Harris is ‘This Sporting Life’ for which he was nominated for an Oscar. It’s the 50th anniversary of the film released in July 1963 and has a connection also between Richard, Limerick and his love of rugby”.

Eleanor McSherry is curating a series of film shorts made in Limerick and, as with a film making competition for the 12-18 age group, all screenings will be at 69 O’Connell Street, Limerick. 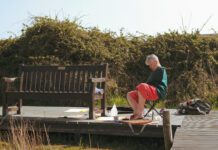