FIANNA Fail members from the Adare/ Rathkeale electoral area claim they were left without no choice but to resort to a picket outside party headquarters in Dublin last week after being “lied to and misled”.

Trouble has been brewing since the Adare/ Rathkeale convention last December when 45 members were deprived of a vote and three candidates were selected for next May’s local elections without a contest.

The protesting members say they were repeatedly promised that Emmett O’Brien, a member of the Fianna Fail National Executive, would be allowed run for Fianna Fail in the Adare/Rathkeale electoral area. Then, on March 1, they were told Mr O’Brien would not be added to the ticket.

The Adare/ Rathkeale electoral area members also claim that the party created a false district known as the ‘Askeaton Estuary’ District and pitted Cllr Kevin Sheahan against Emmett O’Brien in a “sham election” where only 81 delegates had a vote and they could only vote for either Cllr Sheahan or Mr O’Brien.

“Over the past two months we have tried to address our concerns with Michael Moynihan, Chairman of the National Constituency Commission. We wanted answers and an apology for what the members of Fianna Fail endured at the convention”, the Adare/Rathkeale members explained in a statement last week.

“The consequences of Fianna Fail headquarters colluding with partisan local organisations will deprive Fianna Fail members of their democratic voice. There is no democracy in Fianna Fail and we have been left with no choice but to resort to this picket,” they explained.
Meanwhile, Emmett O’Brien commented, “It’s appalling to treat members with such contempt and to mislead ordinary decent people.” 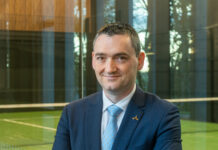