A SPECIAL training day was held at St Munchin’s Community Centre this week to help tackle the serious issue of drug litter in the city.

Twelve community workers participating in an Environment Scheme at the Kileely-based resource centre received special training organised by the Ana Liffey Drug project with support from the HSE Drug and Alcohol Service and the Mid West Regional Drugs Task Force.

With heroin use on the increase in Limerick, the programme was organised to train maintenance and cleaning workers how to properly handle dirty syringes and other drug paraphernalia in their local community.

St Munchin’s Community Centre manager, Linda Ledger commented, “This has been a huge issue since Christmas and we really didn’t know where to turn. Chemists are giving out clean needles but users are just throwing them away when they are done.”

“The participants on this course are getting very good advice on how to handle drug litter and this kind of programme was badly needed. Drug users shouldn’t be given clean needles unless they bring back the dirty ones to chemists first. It’s a huge concern for families with children,” she said.

A young girl was jabbed with a dirty needle last year in the city after a fall from her bike. After HIV tests were conducted the child’s family had to wait nine agonising months to get the all-clear.

Sinn Fein councillor Maurice Quinlivan said drug litter, as well as creating a very real fear of infection and disease in local communities, also acts as a stark reminder of the wider harm caused by the misuse of drugs.

“The long term goal remains to educate local people and communities about drug-related litter and how to deal with it,” said Cllr Quinlivan. 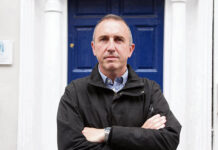