A LIMERICK woman has been inspired by the city’s rich history for her entry to a nationwide garden festival.

Ailish Drake from Montpelier has designed ‘Limerick Culture Garden’ for Bloom 2014, which is Ireland’s largest garden festival and runs over the June bank holiday weekend.

Her creation is sponsored by Limerick City of Culture and she hopes that will attract visitors to the area.

She has split her garden into two, with one area for “repose and relaxation” featuring a tunnel arbour made of hazel and willow and ornamental lawns around her fountain. The second section is a herb garden with flowers and herbs for medicinal and culinary use. It also contains handcrafted willows and a timber frame screen.

Ailish said that she took her inspiration from manuscripts and illustrations dating back to medieval Limerick. After the Bloom festival, her garden will be rebuilt and opened to the public outside City Hall in July.

Ailish works as an architect with Drake Hourigan and she is a practicing historic landscape consultant. She holds a Masters degree in the History of Art and Architecture from the University of Limerick and a certificate in horticulture from the Royal Horticultural Society. 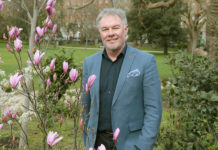