CORK CITY kept their title charge well and truly alive after a hard-fought 1-0 win over Limerick FC at Thomond Park on Sunday evening. Substitute Rob Lehane struck the game’s only goal late on, his deft strike pulling the Leesiders to within three points of leaders Dundalk.

Limerick had the ball in the net as early as the second minute through Shane Tracy only for the goal to be disallowed, although the reason for that decision was not gapingly evident.

Cork soon got on top, as the team’s respective league positions would have you expect, although Limerick coped rather comfortably with the visitors’ early pressure.

John Caulfield’s side had a penalty claim after 15 minutes when Mark O’Sullivan and Stephen Folan seemed to tangle, but referee Derek Tomney was not interested.

The duel between those two players continued throughout the half and Folan was across to avert the danger in the 18th minute just as O’Sullivan was about to shoot.

On 27 minutes, Limerick cheaply coughed up possession in the visitors’ half and Billy Dennehy then embarked on a 40-yard run into the Super Blues’ penalty box, Barry Ryan racing from his goal to deny the Cork midfielder.

Limerick saw more of the ball nearer to half-time and Cork goalkeeper Mark McNulty had to get across to save a 25-yard Rory Gaffney shot, gathering at the second attempt.

The visitors spurned a fantastic chance to take the lead shortly after half-time when the ball fell to Dennehy 15 yards out, but he fired straight at Ryan.

It was a scrappy second half at times, with Cork edgy due to the height of the stakes for them and Limerick not afraid to make life difficult for the title-pursuing Leesiders.

Cork had most of the play after half-time but it wasn’t entirely one-way traffic. Midway through the second half, Limerick substitute Darragh Rainsford shot from a good position but his attempt was far too high to worry McNulty.

With 16 minutes left, Gearoid Morrissey meandered into the Limerick penalty area and laid the ball off for O’Sullivan, who was unable to get a shot away,

In the 77th minute, the course of the title race took a twist when Lehane found himself with time and space in the box to unleash a neatly-placed shot beyond Ryan and into the Limerick net, sparking wild celebrations from Cork’s sizeable and voluble travelling support.

The result seemed inevitable at that point but there was still time for Cork’s nerves to be frayed late on as Rainsford shot from 20 yards, McNulty needing to get all of his weight behind it to make the save.

The announcement of five minutes of stoppage time was met with disapproval from the visiting supporters but there was never any real threat of Limerick staving off a third consecutive home defeat.

It won’t matter a great deal for the Super Blues, who drop to ninth after Bohemians and Drogheda picked up points earlier in the weekend, but this could be the match that Cork fans look back on more than most if they do manage to win their first league title since 2005. 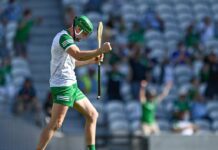 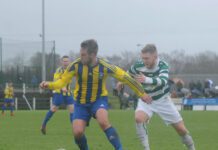