THE intertwining story of two of Ireland’s best loved bands stretches back to 1988 when Tuam band The Sawdoctors were playing a fundraising gig in Galway’s Warwick Hotel. Eleven miles out the road in Spiddal The Waterboys were recording what would become the album, ‘Fisherman’s Blues’. The fact that The Waterboys had relocated to the west of Ireland after the worldwide success of ‘This is the Sea’ and ‘Whole of the Moon’ had already created a huge buzz in Galway. Somewhere in the middle of The Saw Doctor’s four-hour set, saxophone player and founding member of The Waterboys Anthony Thistlethwaite arrived in the door and got up and started jamming along with the band. A musical kinship began that evening that saw The Sawdoctors support The Waterboys on tour and Thistlethwaite eventually join the the Tuam outfit.
As The Sawdoctors are on a sabbatical (singer Davy Carton has moved to the UK with his family), Leo Moran has devised an intimate show based on the living room shows concept popular in the US and Europe. Moran and Thistlethwaite have put together an acoustic show featuring stripped down versions of Saw Doctors hits such as ‘Red Cortina’ and ‘Clare Island’ and Waterboys’ hits such as ‘Fisherman’s Blues’. The duo have taken this opportunity to include their solo material and rare Sawdoctors’ that was not played by the full band regularly. Moran has penned a ditty, ‘Credit Union’ written with Padraig Stevens (‘I Useta Love Her’) that was composed quickly for the opening of the Tuam Credit Union. See it on video on their website.
Reaction to the new stripped back show has been hugely positive. “People tell me it is a lot better than expected,” laughs Leo, talking to Limerick Post.
The two hour show is played at a relaxed pace with plenty of great stories and the lads stick around for a chat after the gig as well.
Anthony Thistlewaite is a founding member of The Waterboys. His tenor sax can be heard blasting through ‘A Girl Called Johnny’, the 1983 debut single for The Waterboys.
He has featured on recordings for World Party, Fairground Attraction, Psychedelic Furs, Sharon Shannon and Bob Dylan to name a few as well as releasing five solo albums.
Anto returned to The Waterboys recently for The Waterboys Fisherman’s Blues Revisited Tour. The tour reunited former members Thistlethwaite and Trevor Hutchinson with Mike Scott and Steve Wickham for the first time since 1990.
“I don’t normally play with The Waterboys so it was a special event,” Thistlethwaite told Limerick Post.
The current Waterboys lineup features Mike Scott’s and Steve Wickham with a US based backing band. The Waterboys’ new album ‘Modern Blues’ will be released in January 19. The new line-up plays its first ever live show at Live at the Big Top at Limerick Milk Market on December 3. Will Anthony Thistlewaite be involved with The Waterboys again in the near future?
“I am not included in Mike Scott’s plans at the moment and he is not in mine,” answers Anto.
Leo and Anto of Sawdoctors and Waterboys play Dolan’s on Friday November 21. 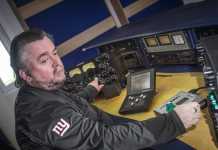