UCD Marian withstood a third quarter comeback from UL Eagles to book their place in the Men’s National Cup Final on January 24th.

The Dubliners took an early lead with Preston Ross dominating in the post and helping himself to an 8-0 run as Marian led by 13 points after 10 minutes.

UL Eagles found parity in the second quarter as Orlando Parker was replaced by James Brophy and Scott Kinevane was allowed to run at the basket but it wasn’t until the third quarter that the game became a true contest.

Neil Campbell led by example in converting the open shots and taking advantage of opportunities from the free throw line to bring the gap down to a single basket.

UCD Marian’s Kevin Foley stepped up to maintain his sides advantage and finish with a final tally of 23 points and Paul Kelleher’s now-or-never time out in the last five minutes failed to produce the desired result. UCD Marian came out on top from some ‘dive-on-glass’ basketball and when Preston Ross landed the first dunk of the game with 90 seconds remaining, the result was beyond doubt.

UCD Marian’s Conor Meany was relieved at the final whistle.

“It was unusual for us to come into the game with the favourites tag,” he said. “We played well in the first half but took our foot off the gas and they started making shots. UL Eagles gave us a great game but unfortunalely we pulled it out. “ 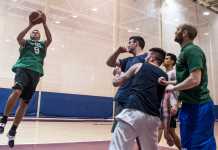 UL Eagles basketball aim to soar back to top tier