PLANS are now underway to get the 2015 Foynes Air Show off the ground.

Councillors from Adare-Rathkeale municipal district held their monthly meeting at the Foynes Flying Boat and Maritime Museum this Tuesday, where a deputation for the air show revealed their plans for this year’s aerobatic spectacle.

The 2014 event celebrated the 75th anniversary of the Pan American Airways ‘Yankee Clipper’ flying-boat making history with the first commercial transatlantic crossing to Foynes. The airshow, which cost €115,000 to put on, attracted 20,000 spectators to the West Limerick port town, and was worth an estimated revenue of one million to the local economy.

Museum curator Margaret O’Shaughnessy, who has been involved in promoting tourism in the region for 30 years, told council members that the overwhelming success of last year’s airshow has spurred organisers into now making it an annual event. She also pointed out that this year would mark the 70th anniversary of the closing of Foynes international seaplane base.

The local authority were asked to fund the weekend-long celebrations to the tune of €50,000. Organisers estimated the total cost for this year’s airshow to be €140,000.

“This will put us on the map not just at home but overseas, but we can’t go forward without the Council’s support. We have to work together,” Ms O’Shaughnessy commented.

“We are looking at putting on an event that will boost tourism for the whole of County Limerick. This is not a local event but one that will have a positive impact in Adare and Glin  and all the surrounding areas,” she said.

Ms O’Shaughnessy also said that they had learned from the mistakes made last year with traffic and are looking at park and ride options for 2015’s airshow. 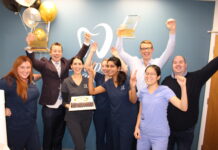