Soccer clubs across Limerick are being urged to enter this year’s Aviva FAI Club of the Year and be in with a chance to win part of the €17,000 prize fund on offer.  Launched by former Irish International Kenny Cunningham and FAI CEO John Delaney this week, the message was that any club can win in these awards, no matter how big or small.

There has yet to be a winner of Club of the Year from Limerick but entry is free for any club and can be completed quickly online, with four different categories a club can enter in to; Participation, Coach Education, Club Development and Community

Paul Neville, League Secretary for Limerick and District League, said; “This could make a massive difference to a club in Limerick.  Even to get shortlisted for the last 8 will earn a club €1,500, which could really help a club develop.  If there’s one thing you can see in recent years it shows that you don’t have to be a big club or winning trophies to win Club of the Year, this is about rewarding teams off the field.  So no matter how big or small your achievements are you should enter, because if you are doing good things for your club this is a great way to be rewarded.  It’s free and you can enter online so there is nothing to lose for clubs.”

The Aviva Club of the Year award, which is now in its tenth year, has seen over €150,000 awarded to clubs all over the country recognising their achievements both on and off the pitch.

The top two in each of the four categories will then go on to the final where they will have the opportunity to present to the judging panel for the chance to be awarded the overall Aviva FAI Club of the Year title at the FAI AGM in July to be in with the chance of securing the €5,000 top prize.

The judging panel is headed by Donal Conway, Chair of the FAI Underage Committees, and includes representatives from FAI Club Development, Dublin City Council and Aviva.  The top two clubs in each category will receive a cheque for €1,500 to help continue their development, while the winning club will receive an additional cheque of €5,000.

Kenny Cunningham, former Irish International, said; “These awards are essential for the game as it gives clubs a reason to strive to be better in key areas like participation and coaching.  If we continue to push clubs to be better in these areas then it will only help improve the standard of the game in Ireland.”

Mark Russell, Aviva Group Sponsorship Manager, said; “This award is a great opportunity for any club in Ireland to win some funds for their club.  It is not an elitist award.  Our previous winners have shown that you don’t have to be the biggest or best club in terms of success in the area to win the award.  Clubs simply have to show what they are doing to make a difference in any of the categories and they are in with a chance of making the final shortlist.”

John Delaney, CEO of the FAI, said; “The Club of the Year award is real game changer for clubs.  This award not only brings financial benefits to a club which is much needed at this time but it also gives the club a real presence in their area.  This helps to attract more young children to the game and improve the standards of each club.  Only by making clubs better will we increase participation and the Club of the Year helps to reward clubs who are going above and beyond to be better.”

Last year’s winners, Trim Celtic FC from Meath, were nominated through the Participation category for their excellent work in attracting and retaining a great mix of boys and girls to the club.  This was evident during the open day with hundreds of kids involved in skill sessions, coaching classes and exhibition matches across the day in front of illustrious guests Kenny Cunningham and the FAI’s CEO John Delaney.

Entry to the Aviva Club of the Year is free and can be completed quickly online at www.aviva.ie/COTY 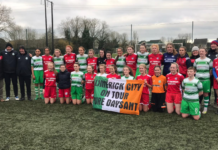