Home News Local News Limerick animal rights activist calls for Rudolph to be taken off the... 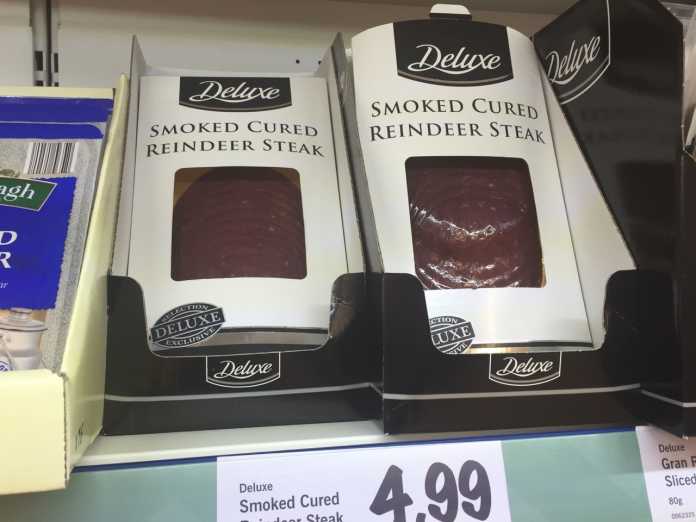 A LIMERICK-based animal rights group are calling on Lidl to take Rudolph the red nosed reindeer off the menu this Christmas.

Animal Rights Action Network (ARAN) have described the supermarket chain’s stocking of smoked cured reindeer steak as a “festive outrage” and are calling on Lidl to withdraw the meat from its stores.

Limerick founder of ARAN, John Carmody, is also urging parents to avoid bringing their children to Lidl stores in the run up to Christmas.

“There is nothing festive happening inside the doors of Lidl this Christmas,” Mr Carmody said.

“Kids would honestly be horrified if they knew that Rudolph’s friends were killed, cut up and packaged into tabletop pieces in the run up to Christmas, a time when peace and goodwill should be the only thing entering people’s homes. Reindeer represent a magical part of Christmas, but this has clearly gone out the window at Lidl in order to profit off the backs of these intelligent animals,” he said.

According to Mr Carmody, selling reindeer meat is a blatant insult to everything that is Christmas, such as the warm images of Santa and Rudolph landing on the roofs of households across Ireland.

“In order to put reindeer meat on the shelves of Lidl, these animals are first herded and chased on motorcycles, snowmobiles and helicopters, and then lassoed with ropes causing huge amounts of stress.

“The reindeer most often have their spinal column severed with a sharp implement, which could take several attempts and may cause paralysis. The kill is not immediate, thus causing a long, lingering and painful death. The animals also suffer by painful earmarking and castration without anaesthetics,” he claimed.

ARAN also believes that over 70 per cent of all reindeer slaughtered for meat are young calves that have grazed during the summer, so never even get to see the snow.

A spokeswoman for Lidl Ireland explained, “For the first time, we are selling Reindeer Carpaccio as part of our premium own brand range, Deluxe. This also includes other alternative meats like quail, ostrich and kangaroo steaks. We aim to offer our customers a wide variety of traditional Christmas products, as well as those they may not have had the opportunity to try before.

“The reindeer that we sell is from the Yamal-Nenets autonomous region in Siberia. The reindeers pasture freely in the tundra year around, changing location on almost a weekly basis. They are herded by local native Nenets people, with reindeer farming playing an enormous cultural and economic part in the lives of the people in this region. All reindeer are slaughtered in strict accordance with EU guidelines and our own high standards of food safety, hygiene and animal welfare.”