ANDY LEE will finally get to defend his WBO World title this Saturday night against Billy Joe Saunders. The bout, which was originally pencilled in for Thomond Park, will take place at the Manchester Arena at around 10pm, live on Box Nation TV.

The eagerly anticipated bout has all the ingredients to captivate boxing fans. The tall and rangy 6’2’’ Andy Lee looks in great condition and extremely sharp in his sparring sessions ahead of the fight.

Lee’s trainer Adam Booth commented: “We have prepared for the best of Billy Joe Saunders, he had a successful amateur career and is undefeated as a pro. However, Andy is a big middleweight and comes into the ring with vast experience as an amateur and professional.

“Andy has the skill set to beat Billy Joe – he can box on the outside, fight at close quarters and has the power to take a fighter out with either hand.”
With the fight only days away, Limerick based fight fans are making plans to travel for the fight to support their boxing hero in what will be the last major boxing event of the year in the UK.

The winner of Saturday’s fight will not only claim (hold on to) the WBO title belt but will also have the opportunity of lucrative fights in the USA against fighters such as Canelo Alvarez, Gennedy Golovkin and Danny Jacobs in 2016.

However Lee is not looking past the business at hand and knows he has a job to do on Saturday night. The former Detroit Kronk fighter commented, “Preparations for the fight could not have been any better. I’m at my best and physically and mentally prepared for this fight.

“The fans are going to be in for a treat – I am in a good frame of mind, I am the Champion, I have the title and the pressure is all on Billy Joe to try and take it off me and that’s not going to happen.

“The talk and predictions about the fight will end when the first bell rings. I am primed for battle and have all the tools in my arsenal to win the fight and I intend to use them on Saturday night. My total focus is on winning and nothing else.” 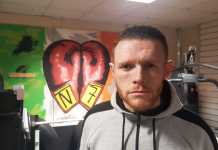 Boxing – The Showdown at Thomond Park