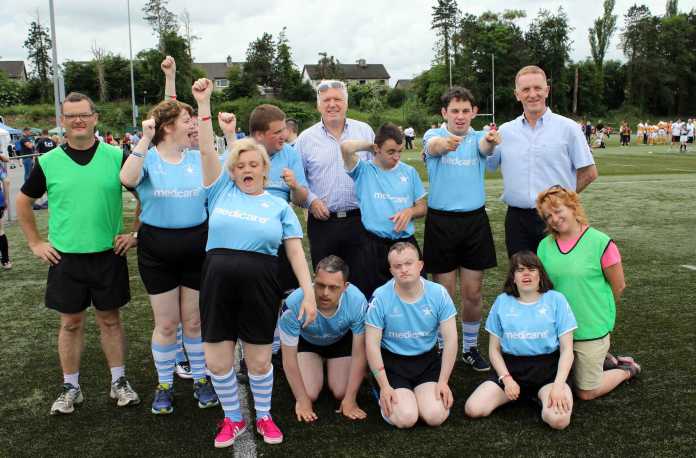 ON THE same weekend that the Ireland International Rugby XV defeated The Springbox and the Irish U20’s defeated the All Blacks, Garryowen FC in Dooradoyle was the venue for the first ‘Wooden Spoon International Special Needs Tag Rugby Tournament’ to take place in the Republic of Ireland. Garryowen FC in collaboration with local Daughters of Charity Service pulled out all the stops to facilitate 400 excited and committed tag rugby players from all over Ireland, England, Scotland and Wales.

The festival kicked off on Friday evening last with a social evening for the visiting Clubs which included a BBQ and disco and the Club was hopping with excitement. It was evident that all visiting teams and supporters were in Limerick to enjoy the weekend. Club stalwarts including Geraldine Morrissey, Seamus Maher and Tony Kiely were on board to extend all the hospitality and excellent facilities the Garryowen FC had to offer.

The Tournament kicked off on Saturday morning thanks to a lot of collaboration and team work from a number of different agencies. The IRFU event management team under Mike Coughlan were on board to manage the scheduling of matches, provision of excellent referees and general running of the matches which was managed very professionally. The IRFU are very proactive in promoting Tag Rugby and Mike stated ‘they were delighted to be involved in such a prestigious and positive tournament’. Munster Rugby through Euan Gee, Community Development Officer, was on board to assist with the coordination of the volunteers and managing the matches and the event. Euan has been instrumental in the development of special needs tag rugby in Munster and he said ‘the tournament was a great success and shows how much the players benefit from being involved. Euan said ‘there was huge scope for adults and kids with special needs to get involved in Tag Rugby in the province’. The local Civil Defence, thanks to Jos Kirby, provided medical support and tentage for the weekend.

The tournament director John O’ Callaghan and the tournament committee including Donal Sherlock, Gerard McAuliffe, Glennis Quinlivan and Rose Servitova was planning and organising the tournament for many weeks previously. All were delighted with the facilities the Club had to offer to accommodate such an event. Not alone were the pitches in excellent condition as well as the superb all weather pitch, the club house was fully utilised to provide BBQ, lunch and dinner for up to 1000 people who dined. Additional facilities including coffee trailer, ice cream van and food stall were set up to add further to the festival feeling. The ‘Music Generation’ double decker touring bus was parked in front of the club house and they provided excellent live music on stage to entertain everyone once the tournament matches had finished and everyone was being fed. Club stalwarts Mike Power and Jim Kinnevane were also on board to give of their time and expertise to assist with the smooth running of the tournament.

The tournament was supported by many excited supporters and to add to the occasion rugby legends Fergus Slattery and David Wallace also attended. David, who attended with his family is a Garryowen Club member, stated ‘he was delighted to see such an excellent tournament being run in Garryowen FC’. David was quick to get involved in the spirit of the day and spent a lot of time talking with and posing for photographs with many of the players.

Fergus Slattery, who has been inaugurated into the International Rugby Hall of Fame in recent year’s is also an ambassador for ‘Wooden Spoon’ in the Republic of Ireland. Fergus was instrumental in introducing Wooden Spoon Charity got totally involved in the event and engaged with players, supporters and families and posed for many photographs with all that requested it. Club man Kieran Ryan was on hand all day to capture all the events of the day on camera and highlight the tournament on the club website and social media.

The Tournament itself was all about the players and the matches and local coaches of the ‘Garryowen Lions’, Ashley Ryan and Michael Hennessey stated how much the players really enjoyed the rugby and clearly they had raised their game for the matches. There was a very special and positive atmosphere in Garryowen FC during the tournament. The tournament finished with the presentation of trophies and medals. Tournament Director John O’ Callaghan thanked those who made the event possible. In particular ‘Wooden Spoon’ whose generous sponsorship and support made the weekend possible. Other funding was sought from Limerick City Council Diaspora fund and Black Bee Investments. John also thanked the many volunteers who helped from Black Bee Investments, Bank of Ireland, Dell, Garryowen FC, Daughters of Charity, Ard Scoil Ris Secondary School to name but a few.

Garryowen FC Club Chairman Dermot Morrissey and Fergus Slattery presented the trophies and medals to each club. Dermot stated he was delighted and humbled to part of the day and Garryowen FC were committed to supporting community projects and events into the future. Fergus explained where Wooden Spoon had started dating back to 1983 when he was on the Irish Team who defeated England to get the Wooden spoon that season. Fergus explained that during post-match celebrations a group of Irish supporters presented a wooden spoon to a group of English supporters who took the spoon back to the UK and used it as a fundraising emblem to raise funds which today has grown into a major charity fundraiser through Rugby. Fergus was instrumental in bringing Wooden Spoon back to the Republic and was delighted to see the scale and professionalism of this year’s tournament in Garryowen FC. Des Kavanagh from the IRFU also supported the tournament and he said during his speech the IRFU were fully behind the development of special needs tag rugby. Des stated that the development of special needs tag rugby completed the circle of the Rugby family alongside mens, women, and underage rugby.

It is proposed that next year’s Wooden Spoon Special Needs Tag Rugby Tournament will take place in Witney in the UK.