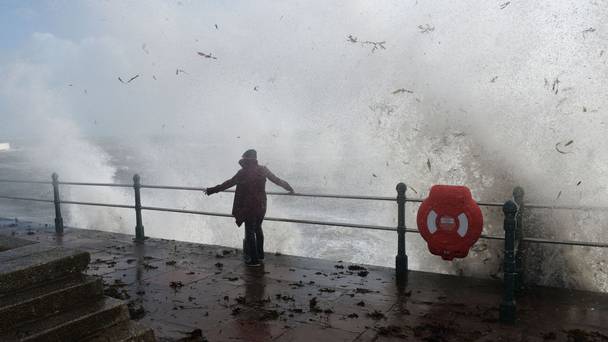 The devil may care 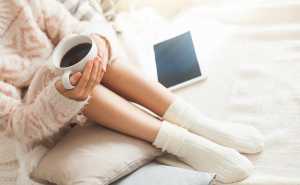 Well, are ye all okay? Did ye survive the onslaught, stay indoors like ye were told, live off tinned pineapples and out-of-date noodles while herself turned the country inside out? Did ye batten down the hatches and huddle up for warmth, pray for salvation as the foundations shuddered and the dog pissed all over the carpet? Or did you just treat it as a bit of craic, a day off work, an opportunity to bring the duvet downstairs and pretend the end was nigh as you stuffed your face with Pringles?

For most us it was just a novelty, a once-in-a-lifetime event which ultimately bore us no serious harm. We were the lucky ones. For the families of the three people who died, Storm Ophelia will never be forgotten, a vengeful inferno which robbed them of their loved ones. For the thousands left without electricity and the many more counting the costs of the damage, she will be remembered as a wretched wench, maybe not as wretched as her 2009 equivalent, but wretched nonetheless.

And then there are the people who will view the aptly-named hurricane in an entirely different light, who may even look upon her fondly, reminisce about her visit, regale friends and family with tales of her mischief, her sheer wickedness. These are the people who disobeyed orders, laughed in the face of the authorities and said, “Storm?! Hurricane?! We’ll see about that.” They chose to stare Ophelia down, to go wind-surfing, swimming, and sailing, to go “out for a look,” to venture into the heart of darkness while the world raged around them. 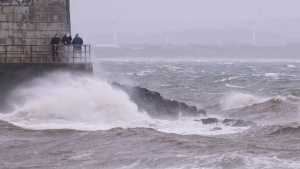 These people were undoubtedly a little stupid, reckless even. By ignoring the warnings and engaging in pursuits which may have put theirs and the lives of others in danger, they were selfish, irresponsible and immature. With emergency services already stretched to their limits, these people, these thrill-seekers, could have, through their desire to have some fun, diverted attention away from people who’d followed all the rules, who had heeded all the warnings and who, through no fault of their own, found themselves in need of assistance on one of the most desperate days we’d ever witnessed.

If that had been the case, if we had seen a repeat of the tragedy which saw the crew of Rescue 116 lose their lives, or if someone vulnerable and isolated had been overlooked in favour of these water-sport enthusiasts, then the outrage would have, quite rightly, been as frenzied as Ophelia itself. Mercifully that didn’t happen. All those who willingly took to the seas made it home safe, some with a little help from rescue crews, most by their own accord. But should they have been allowed to go out there? Should there have been restrictions in place, measures to ensure they weren’t able to venture into the depths on such a wild and wicked day? And should those who, in future, choose to follow their lead face criminal charges?

Personally, I think that’s a bit much. Yes, I know their actions endangered the lives of others and that it’s only thanks to the grace of God that we’re not sitting here discussing further deaths, further accidents. But making it a criminal offence, forbidding someone to partake in leisure activities based on the weather forecast? No, that’s a step too far, that’s the nanny state gone into hyperdrive and would set a very dangerous precedent. One day we’re preventing people from going swimming because it’s a bit windy, the next we’re putting curfews in place because the streets just aren’t safe anymore.

Where would it stop? Would we ban all ball-games on those rare occasions when the thermometer crept over thirty degrees, bundling confused children into the back of the Paddy Wagon before they’d even got to pick the teams? And how would the general public react if, thanks to new legislation brought in to ensure we didn’t get lost on our way home, all pubs were closed anytime it got foggy? What if the whole country came to a complete standstill anytime it snowed? Oh wait. Never mind. 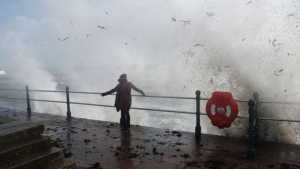 But say we did make it a crime, say we forbade anyone from entering the sea on certain days, how on earth would we enforce it? By placing patrols along the seafront? Asking yet more people to put their lives in danger just so they can stop the odd nutter from going skinny-dipping during high tide? Or perhaps we’d let them go out first, let them frolic in the ocean, and then send them to jail as soon as they’ve dried off? It wouldn’t work, the very fact we’re even discussing this shows how prudish we’ve become, how we now live in a society which favours hysteria over common-sense.

Try as you may, you’re never going to stop people from acting the maggot. They will always find a way. And the more restrictions you set in place the more determined they will get. Telling lads like these that they can’t go surfing, that it’s against the law to do so, merely adds to the enjoyment, makes it that bit more appealing, sexy even. You might save one or two lives, but you’ll lose a damn sight more. Criminalising something which only a few mentalists have the stupidity to do will only make it more popular, give it a sense of added danger, accentuate the problem instead of alleviating it.

No, if people want to go wind-surfing during a hurricane then let them. If they want to swim the English Channel at night, wearing nothing but a pair of illuminous Speedos, then leave them off. And instead of standing at the shore with a big sign saying: ‘All those who enter face prosecution, and quite possibly prison’, we should inform them that should they encounter difficulties then there will be no-one there to save them, that the people who would usually come to their rescue are far too busy doing proper work, looking after the sensible sorts like you and I, the type of people who get our thrills elsewhere, from watching eejits go swimming in forty-foot waves and the like.

Putting the lead back into Limerick’s pencil 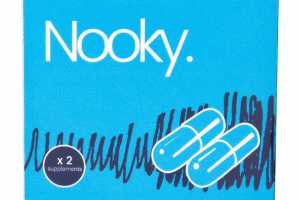 It’s been a tough few weeks for the city of Limerick. Tiresome stereotyping from US celebs, exploitative film-making from RTÉ, and worrying statistics on suicide have meant that, once more, Limerick finds itself in the headlines for all the wrong reasons. But I’m here to buck that trend, to provide you with the lift you all so badly need.

Although on second thoughts, maybe you don’t need a lift at all. Because, according to budget retailer, Dealz, Limerick people are the most virile in the country. It has revealed that more items from its new ‘Nooky’ range of adult toys have been bought here than anywhere else. With over 6,500 products purchased you have proved yourself the king and queens of the bedroom, the master and mistresses of rumpy-pumpy, and just a generally saucy lot.

So, what exactly have you been buying? Well, there’s the evocatively titled ‘Blue Pills for Men’, which I can only presume are some sort of health supplement for the older gent. Then there’s the ‘Finger Fun Stimulator’ which, in all honesty, sounds like the latest from the folks who brought you the fidget spinners. The ‘Joy Ring’ is suitably vague, and suitably unimpressive when compared to the much more exciting, ‘Vibrating Love Ring’. And the ‘Vitality Supplements for Her’ are obviously meant as an accompaniment to those blue pills the lads are taking.

However, despite your obvious vigour, I wouldn’t get too cocky just yet. Yes, you are buying this stuff quicker than they can put it on the shelves, but that wouldn’t be hard now would it? Is it possible to walk ten feet in Limerick without ending up inside a Dealz store? There’s more of them than there are pubs nowadays. Not only that, if you’re spending €1.49 in an attempt to spice up your sex life then you can hardly be considered the most romantic of people now can you? Then again you’re probably too busy trying out your new toys to even care what I say.