LIMERICK FC’s latest signing Cian Coleman has revealed that there was interest from overseas clubs but the energetic midfielder was left with an “easy decision” after speaking with Super Blues manager Neil McDonald.

Coleman gained SSE Airtricity League Premier Division experience with Cork City, having impressed in their Under-19 setup where he was part of two league-winning squads as well as captaining them to the Enda McGuill Cup and in their UEFA Youth League ties against HJK Helsinki and AS Roma last year.

The Cork native, who will turn 21 on New Year’s Day, moved to First Division side Cobh Ramblers at the beginning of this year to enjoy more senior game-time, and he played in the majority of their matches as they finished runners-up to Waterford.

One of Coleman’s former teammates at Turner’s Cross, Chiedozie Ogbene, was a standout performer for Limerick in the past season when given his chance to shine in the top flight.

And Cian takes inspiration from Ogbene’s eye-catching displays, with his aim to replicate that by “expressing himself on the pitch” and repaying the faith that McDonald has shown in him.

“The day after the season ended, I was contacted about Limerick’s interest in me, which is always nice to hear. There were clubs from abroad interested too, but when Neil called me I was impressed by what he said, especially from such a respected coach and from a club like Limerick. It was an easy decision for me after that.”

Coleman has his eyes on following in the footsteps of Ogbene, who quickly became a fans’ favourite at the Markets Field in his first season, with the former Everton AFC youngster never in doubt about the winger’s ability.

Cian added: “Chiedozie ripped it up last season; it was great to see him progress and come straight out of the blocks when he came up here.

“I played with Chiedozie for two seasons at Cork City and when he came in we could all see he had it. I was delighted for him seeing him do so well here. He proved how valuable he was to the club and repaid the faith shown in him. My aim is to do the same and express myself on the pitch like Chiedozie did in his first season in the Premier Division.”

Coleman also believes he learned a lot during a full year playing with Cobh, where he caught the attention of McDonald, including in the Irish Daily Mail FAI Cup tie between the clubs in August.

“We had a good season at Cobh and challenged right up to the end which was testament to the hard work we all put in right through the season in such a competitive division with all teams fighting for the one promotion spot.”

Asked what Limerick fans can expect to see from him in 2018, Coleman explained: “Being a League of Ireland fan myself, I know the fans expect and deserve hard work and dedication from every player that wears not only the jersey but the training kit.

“I know I’ll give 150 percent in every training session and sacrifice everything for the club when I put on the jersey. I’m known I suppose for never giving up and fighting for every ball. I believe in a never-say-die attitude and passion for winning, which is what I want to do at Limerick.”

His goal, he adds, is: “To win. I want to help the club to win and to challenge in every game. Firstly, of course, my aim is to get in the team and play consistently for Limerick FC.”

Coleman has already enjoyed one happy night at the Markets Field, where Cork defeated Limerick in the Under-19 League Final in December 2015, and he is relishing the chance to experience the atmosphere of the Super Blues supporters.

“Obviously, the Under-19 Cup final two years ago was good,” he said. “I can’t wait, though, to step out there in a Limerick jersey. It’s a great place to play and I look forward to experiencing the atmosphere as a Limerick player.”

An energetic and determined midfielder, Coleman can also cover at centre-half.

Coleman was part of the Cork Under-19 setup between 2013 and 2016, last year captaining them in their four legs against HJK Helsinki and AS Roma in the UEFA Youth League. He was also part of the sides that won two league titles and the 2016 Enda McGuill Cup, which he skippered them to.

Coleman’s performances earned him his Premier Division debut in August 2015 as he made a late appearance, replacing Kevin O’Connor, in a win over Saint Patrick’s Athletic at Turner’s Cross. He also made two league outings late in the 2016 campaign, replacing Seán Maguire in one of those, as Cork finished second.

He then made 23 league appearances for Cobh in their 28-game campaign – netting four goals – as they finished runners-up in the First Division behind Waterford.

He was also part of the Ireland Schools Under-18 squad that went unbeaten in winning the Centenary Shield in April 2015. 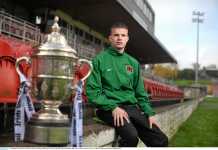 Morrissey makes his way to Limerick 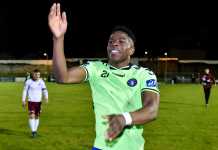 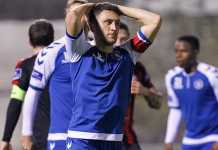