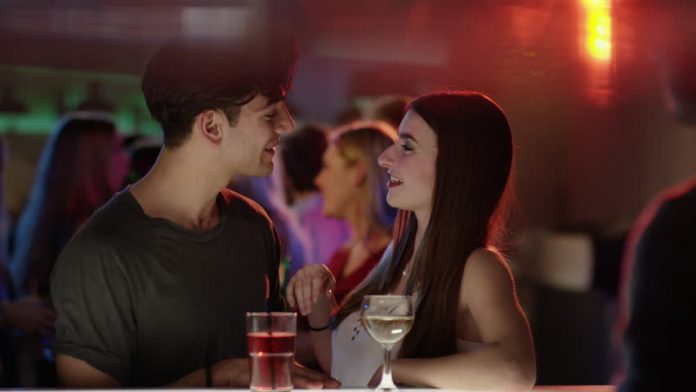 I see you baby Someone was watching him, he could feel it. Someone sat in a booth at the other side of the club. Their eyes had been on him for a while now. He daren’t look. It could be anyone. So, he continued to talk to his friends, leaning in close to hear them above the din. But they weren’t talking about anything interesting, just a match one of them played in, a fight that broke out near the end. And still he could feel those eyes trained upon him, challenging him to look their way, to answer their call.

He sneaked a glance in their direction. It was a girl, a woman. Blonde and attractive, and looking at him. Except she wasn’t just looking, she was gazing, and, if he wasn’t mistaken, she was doing so longingly, maybe even lasciviously. He looked back again, holding her gaze for a millisecond. She didn’t look away, just continued to stare. His stomach filled with butterflies, his testes shrunk back inside him, what the hell was he supposed to do now? He nudged one of his friends, “Over there,” he said, nodding his head in her direction, “look at your wan.”

Not known for his subtlety, his friend gawped over in her general direction, “Which wan?” he asked, rising from his seat like a captain viewing land after months at sea. “There’s a wan over there staring at me,” he said, ruing his friend’s lack of decorum. “Well go over and talk to her, then,” came the advice. He mulled over this a moment. Talk to her: Arise from his seat, walk towards her, and engage her in conversation. It sounded so simple. And yet it was fraught with danger. He would be walking through a minefield, approaching a ticking timebomb, risking life and limb. And for what? No. It was much safer to stay where he was.

But still she looked. With more intensity now, if that were possible. He continued to offer her brief morsels of encouragement, a furtive scan across the room, his eyes momentarily resting upon hers as he went, as if by accident. And all the while, her gaze never faltered; she stared him down, challenged him to come hither, asked that he be a man and do the decent thing. And he was a man, he was sure of it. But what was it to be a man? Did being a man mean propositioning women in the local nightclub of a Saturday? He had no idea. So he stayed put. He ignored the signs, the chemistry, and his instincts, and drank until he could drink no more. Far better to get hammered with the lads, to drink the pints, the shots and the fruity concoctions which came his way, then to make that walk, to risk the chagrin of her and her friends. To risk the catcalls and accusations, the admonishment and the shame. Far better to venture nothing, to live a safe and uncomplicated life, to have a guilt-free conscience, a mind uncluttered by the wonder of love, lust and longing. To avoid women completely unless they dragged you into the bushes and had their way with you. To go home at the end of the night, put on a virtual reality headset, and have sex with a figment of his imagination. This is what he had been taught by society. This was the world he had grown up in.

The above scene is a figment of my own imagination, an ever so slightly dramatized look into the future, a look inside the mind of the average eighteen-year old male in say, twenty years’ time. This young man is, like all young men, a product of his surroundings. He is a gentle man and a gentleman. He is kind, considerate and caring. He respects both men and women, children and animals. He is in touch with his inner self and is capable of expressing himself in the deepest, most remarkable, ways. He knows not of bigotry, racism or discrimination. He is almost perfect, moulded by ever attentive, perpetually involved, parents, into the most darling of chaps. If only he weren’t so terrified, so mortally afraid, of women. If only he weren’t in awe of the female form. If only he didn’t believe that they were not to touched, to be spoken to or looked at.

It’s startling how quickly the revelations surrounding Harvey Weinstein and the subsequent backlash against male power and overt sexual dominance has grown into something else entirely. What begun as a reawakening, a chance for men from all walks of life, to reassess their behaviour and ask whether they were guilty of the crimes listed above, now threatens to obscure masculinity entirely, to change the concept of manhood and what it is to be a male of the species. Some of you might say about bloody time. And you’d be right, to an extent. Because things certainly did need to change, a large cohort of the male populace had got away with too much for far too long. They have now been shut down, their actions no longer tolerated by not only their targets, but their peers too. And yet the outrage continues, the women of Hollywood, as ever, leading the way. These gilded icons, untouchable, unreachable, donning black in a show of unified defiance, speaking for not only themselves but women everywhere; telling the world, the men of this world, that they are not going to take it anymore. Call me naïve, call me blinkered, but hasn’t their objective already been achieved? Such was the all-encompassing nature of last autumn’s #metoo campaign that it was impossible for any man to not reassess his behaviour towards women. It was a revolution, an uprising, arguably the most important political event of this millennium.

Those that needed to be told, were told. Those who needed to be reproached, reprimanded or worse, have been so. And the rest of us, the silent majority, who endeavour to treat women with respect and regard, held our counsel, stayed well out of it, as is our wont. Because you can’t really change us. You can force us into the odd moment of introspection, have us question our values, our core belief system, but we’ve already come of age, learned things which can’t be unlearnt. No. The only men who can really be influenced by this continued campaign are the men of the future, the men who haven’t even been born yet.

Again, I welcome a world where boys learn from a young age that it’s not okay to pass comment on a woman’s appearance. That it’s not okay to engage in playful banter, to put your hands where they shouldn’t go because you’re just messing around. To presume a woman is ‘up for it’ because she’s dressed in a certain way, to assume that because she accompanies you home she’s sexually available. And that a kiss is not akin to consent, and that no means no. This is all long overdue and will ensure that the women of tomorrow grow up in a more equal and just society than their forebears. What of the men of tomorrow though? What will become of them? Because, like it or not, there are some rules which even this recent revolution couldn’t rip up. These may be more modern times, we may have come a long way from girls sitting demurely in their chairs while red-faced suitors gruffly asked them for a dance, but when it comes to romance, to initiating that first encounter, the onus is now, and always has been, on the man. I know, I know, what a Neanderthal, what a hypocritical, male privileged, monster, sure aren’t you always asking lads out, don’t you insist upon making the first move, and wouldn’t you just baulk at the notion of being chatted up against your own will? Well, fair played to you. But you are in the minority. And that will never change.

If it were suddenly left up to women to do all the running, to seduce us while we giggled and batted our eyelashes, the human race would die out in a couple of centuries. That’s not a reflection on the seduction techniques of the average female, far from it. But you’re just not as committed to it as we are. You’d just as soon have a night out with the girls. For us it’s all day, every day. We can’t help it, this is how we were made. And we’ll continue to be made this way. Which is why I fear for the men of the future. If they are brought up believing that it is morally wrong to ‘go out on the pull’, to ‘chance your arm’, and to pursue the woman they are irredeemably attracted to, and that to do so is contemptible, then we’re already dead.