Michaela Deane, a fourth-year student of the University of Limerick’s Journalism and New Media degree programme won the competition for her news report on the “important public health issue” of access to the emergency contraceptive pill.

“Michaela’s entry showed innovation and courage, tackling an issue that has not yet been addressed by mainstream media. The package was well crafted with skilful use of interviews and inserts and showed a depth of understanding of the issue. Michaela has a promising career in journalism ahead,” said Head of News at Live 95FM, Gillian Devlin.

“I am absolutely thrilled to have won Limerick’s Live 95FM Broadcast Journalism Award this year, there was an enormous amount of work put into my radio package. Educating people about reproductive healthcare in Ireland is something I’ve been extremely passionate about since I started campaigning to repeal the 8th amendment in 2016.” said Michaela Deane, a native of Co. Mayo.

The radio package features a range of voices from women who have experienced shame and embarrassment in pharmacies while trying to access the morning-after pill and from pharmacists who justify their refusal not to grant it for a range of reasons.

“I decided to create a package on the difficulty that people can have in accessing the morning after pill because it’s something that really tied in with our recent referendum on the 8th amendment,” Michaela told the Limerick Post

“Reproductive healthcare is something that can be very hush hush in Ireland,” she continued, adding, “but I think it’s important that we talk openly and honestly about sex education and contraception, including emergency contraception.”

The UL student when on to say how she hopes the vote to repeal the 8th amendment will allow people to “have those conversations more easily”.

There was a wide range of entries this year from first- and final-year journalism students at UL. The news reports dealt with a number of issues including the stigma of postnatal depression, to the therapeutic benefits of art, music and dance for people suffering with mental illness, to the stagnation of the Irish language in schools in Limerick. According to judges, entries were of a high news value and were creatively produced.

The purpose of the package, Miss Deane told the Limerick Post was “to give a voice” to the women she has spoken to.

“I’m hoping that by highlighting this issue, it encourages people to talk more openly about contraception, because that’s the only way to break the stigma around it,” she concluded.

Lecturer in journalism at University of Limerick, Audrey Galvin said, “Michaela deals with an important public health issue in this production and it is a topic that needs to be brought into the wider populace.

“Michaela’s report is an excellent example of the core broadcast and digital values and skills which underpin journalism here at University of Limerick”.

Mary Dundon, Head of Journalism at UL, said, “Here at the Journalism Department in UL, we have strong links with industry across all platforms.”

The Head of Journalism at UL added, “Competitions such as this serve to engage the students with the demands of working in radio and are a product of our convergent approach to journalism. We are excited to continue to build upon our relationship with the station.”

As the first prize recipient, Michaela received €500 from Live 95FM and will have her package broadcast on the station. 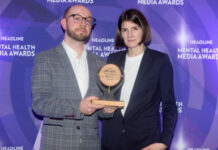