Limerick’s hurlers will contest their first All-Ireland Hurling Final since 2007 after beating Cork after extra time at Croke Park on Sunday.

John Kiely’s side clawed back a six point deficit in the final 10 minutes to book a black in the August 19 decider against either Clare or Galway.

Goals from super sub Shane Dowling and Pat Ryan in extra time saw Limerick to an astonishing 3-32 to 2-31 victory.

A Cian Lynch goal had helped Limerick to a one point advantage at half time but Cork began to take control in the early stages of the second half with Daniel Kearney and Darragh Fitzgibbon impressing.

Conor Lehane’s goal in the 53rd minute looked to have sank Limerick but the introduction of Dowling changed Limerick’s fortunes.

The Na Piarsaigh sharpshooter’s first call of duty was to put over a difficult free from long range.

Efforts from Kyle Hayes, Aaron Gillane (two frees) and Dowling again brought Limerick to within a point, before Gillane sent over one from play to level it up.

Limerick are heading to the All-Ireland Hurling Final after an unbelievable win over Cork after extra-time in Croke Park! Check out the full-time highlights here on GAANOW! pic.twitter.com/Hpssrtzo1h

Limerick keeper Nickie Quaid then made a brilliant intervention as the game clicked into added time when Seamus Harnedy had the goal at his mercy.

Gillane soon had Limerick in front from a placed ball but Patrick Horgan forced extra time with a free under intense pressure.

Limerick were the dominant side in extra time. Gillane missed his third goal opportunity the game from their first attack of the added period and added another free.

The key moment in the entire game came when Dowling burst in on goal and Mark Ellis pushed him to the ground and referee Paud O’Dwyer awarded a penalty.

Dowling dusted himself to take the penalty himself and fired his effort into the top corner to the delight of the Limerick crowd.

Pat Ryan soon followed up with a superb individual effort that finished with a lob over the advancing Cork keeper Anthony Nash.

Cork added a late goal from a Horgan long range free late on but Limerick were not to be denied a place in this year’s All-Ireland Final. 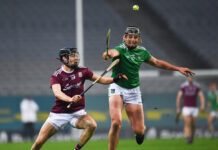