Mark Enright was confirmed as the top National Hunt jockey after riding his third winner of the meeting aboard Henry de Bromhead’s Show And Go in the Lord Hemphill Memorial Handicap Chase on the final day of the festival.

Enright made headlines on Wednesday when he claimed victory in The Galway Plate aboard the Gordon Elliott trained 33/1 shot Clarcam before claiming a double on the day aboard Jessica Harrington’s Rovetta.

The 25-year-old jockey had considered retirement not so long ago as he struggled to overcome a battle with depression.

Lee won on Tom Hogan’s Honor Oak and Shark Hanlon’s Camlann on Thursday, before landing the featured Guinness Handicap on Friday aboard the Mullins-trained Nessun Dorma.

Billy Lee was confirmed as the top Flat jockey at the Galway Festival with three wins. He had a double on Thursday and won the featured Guinness Handicap on Friday aboard Nessun Dorma. 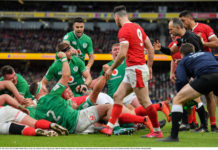