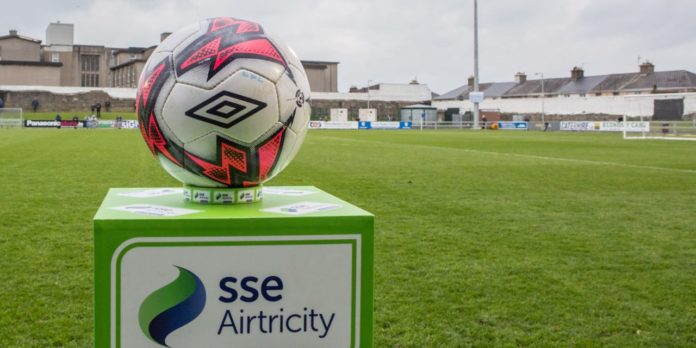 Limerick FC suffered a hammer blow to their chances of avoiding a promotion/relegation playoff in October as they were on the end of a 1-3 defeat to Sligo Rovers at the Markets Field on Friday night. Two goals from Mikey Drennan including a penalty and a wonder strike from Raffaele Cretaro provided Ger Lyttle’s side with a valuable victory which all but guarantees that the Bit O’Red will compete in the premier division next season. Limerick captain Shane Duggan scored an impressive goal for Limerick but it counted for little.

Limerick lined out with a familiar 4-2-3-1 formation which included a back four of Killian Cantwell, Eoin Wearen, Killian Brouder and Billy Dennehy. Captain Shane Duggan and Cian Coleman were handed the defensive midfield roles with Barry Maguire operating directly in front of them. Young wingers Karl O’Sullivan and Will Fitzgerald were on opposite wings while Conor Ellis played the lone striker role.

Sligo started with a 4-1-4-1 formation with a defence of Seamus Sharkey, John Mahon, Patrick McClean and Regan Donelan. Jack Keaney screened the defence from a midfield position while former Limerick player Lee-J Lynch featured in a number ten role.

Limerick made a good start as a deep Will Fitzgerald cross was attacked by Karl O’Sullivan but his scooped effort from just inside the box was easily caught by Sligo goalkeeper Mitchell Beeney.

Sligo fashioned the second chance of the game as a poor clearance from Cian Coleman was picked up by Rhys McCabe and the midfielder let fly from the edge of the box but the effort flew just over Tommy Holland’s crossbar.

As half-time approached, Limerick successfully cleared a corner but Raff Cretaro picked up the ball and delivered a superb cross which was headed into the net by Mikey Drennan from close range. It could be argued that Limerick were slow to clear the six yard box but the quality of the delivery was perfect for the onrushing Drennan.

Limerick came close to equalising as Billy Dennehy’s overlapping run was spotted by Will Fitzgerald but his rising shot was tipped over the bar by Beeney. It turned out to be the last chance of a dull opening half.

Limerick started brightly in the second half as a deep cross from Shaun Kelly was volleyed over the bar by Will Fitzgerald. The young winger should have done better as he was totally unmarked at the back post. Limerick created a great chance as Karl O’Sullivan played a neat one-two with Conor Ellis before placing his shot straight at the advancing Beeney when in a great position inside the box.

Unfortunately, Limerick were made to pay for those missed chances once more as they gifted their opponents a goal. Eoin Wearen pushed Drennan in the box and referee Robert Harvey wasted no time in pointing to the penalty spot. Drennan converted the penalty to grab his second goal of the evening.

The Shannonsiders were given hope when captain Shane Duggan cut inside a challenge in the penalty area before rifling a right-footed effort in to the bottom corner of the net. However, any hope Limerick had of clawing Sligo back was ended when veteran Raff Cretaro gained possession from all of 30 yards before curling a shot into the top corner of the net, giving Tommy Holland no chance.

Lee-J Lynch embarked on a long range run which saw him glide past the challenge of Killian Brouder before blasting an effort at goal which was easily gathered by Holland.

As the final whistle approached, Danny Morrissey capitalised on a short back pass from John Mahon but as he bore down on goal he dragged a shot badly wide of the goal.

That proved to be the last clear cut chance of the game as Ger Lyttle and his management team did an effective job of closing out the game. Limerick are now eight points ahead of the Super Blues with a game in hand.