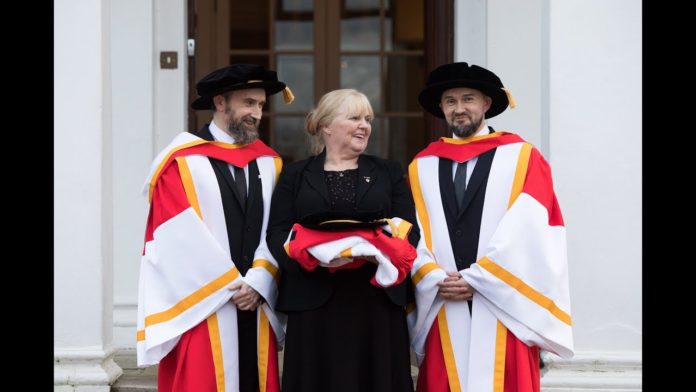 University of Limerick conferred Honorary Doctorates of Letters on the band members of Limerick rock band The Cranberries.

Guitarist Noel Hogan, bassist Mike Hogan were presented with an Honorary Doctorate of Letters. The Cranberries drummer Fergal Lawler was unable to attend and his doctorate was accepted on his behalf by Mike Hogan. Eileen O’Riordan, mother of lead singer Dolores O’Riordan, who tragically passed away this time last year, was presented with a posthumous Honorary Doctorate of Letters for Dolores O’Riordan.

Speaking to the press before the ceremony, Eileen O’Riordan Dolores didn’t know how loved she was by the people of Limerick.

“I don’t think she did. She loved Limerick, she was very proud, happier in Limerick than any place. Well I didn’t realise how much she was loved, I didn’t really.

“To take that in, I keep telling the children how much everyone loves her and what a support it is. Our comfort in it is toward the family.”

Band Member Noel Hogan said Dolores would “get a great kick out of this”.

“These kind of things she used to get a real skit at,” he said, adding “because even when this was brought up to us, I think it was about four years ago, when the university first approached us, timing was never right for us.”

“I remember her telling her brothers, who have different degrees, that she would be more qualified than they are. You know, that was her personality.”

UL President Dr Des Fitzgerald said “UL had initially planned to present these doctorates to The Cranberries in April 2017 however promotional and rehearsal commitments prevented the band from being available to accept the honour at that stage.  It is with very sad regret that since that time the world and more importantly her family and band mates have lost Dolores O’Riordan and her incredible voice. We very much appreciate her family’s presence here today and particularly her mother Eileen who is accepting this Honorary Doctorate on Dolores’ behalf.’