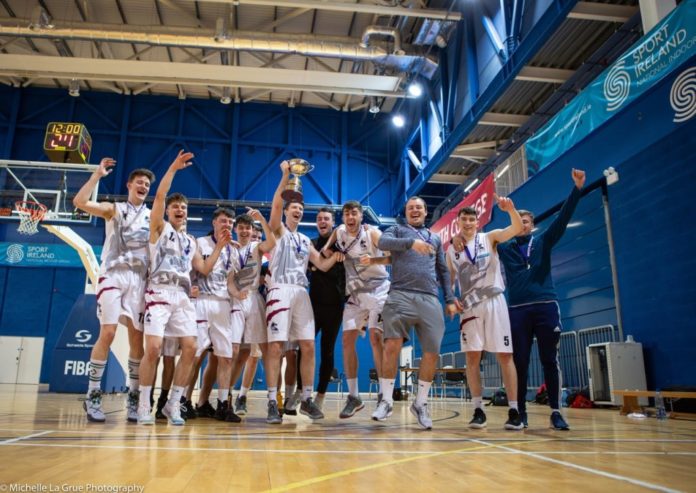 UL retained their men’s Division
B Intervarsities title in style yesterday afternoon with a 69-87 point win over
Maynooth University in the final. A stunning 37-point display from Maynooth’s
Paddy Sullivan just wasn’t enough in the face of a deep and well-drilled UL
team, with Dylan Corkery, Keelan Crowe, Finn Hughes and Diarmuid O’Shea some of
the standouts in an all-round solid team performance.

UL got off to a big start in the
first, with scores raining in from O’Shea, Corkery and Crowe. Big work at the
other end from Sullivan and Finn Hughes kept Maynooth’s scoring ticking over,
but UL held a 17-29 lead going into the second.

Momentum stayed with UL into the
second, with O’Shea and Vitatistis dominating the scoring for the reigning
champions, but again, Sullivan led the way for Maynooth with a huge three
getting their scoring underway in the second, with Hughes and Rory Connell
adding scores to see the half time score 29-45.

It looked like the pace of the
game would remain the same in the third, but Maynooth and Hughes and Sullivan
had other ideas. A massive surge midway in the third saw scores dropping from
both shooters and big defence inside helping to close down the UL offensive
threats. Luke McLoughlin added some super baskets to bring the game right back
into the melting pot and they had closed the gap to just two points, 57-59
going into the last quarter, outscoring UL 28-14 for the period.

The holders dug deep in the fourth though, and led by Corkery, began to widen the margin out once more. A huge three from O’Shea followed, with threes from Crowe and Corkery widening the gap even further, and despite the best efforts of Sullivan at the other end, UL held out defend their title well, 69-87.