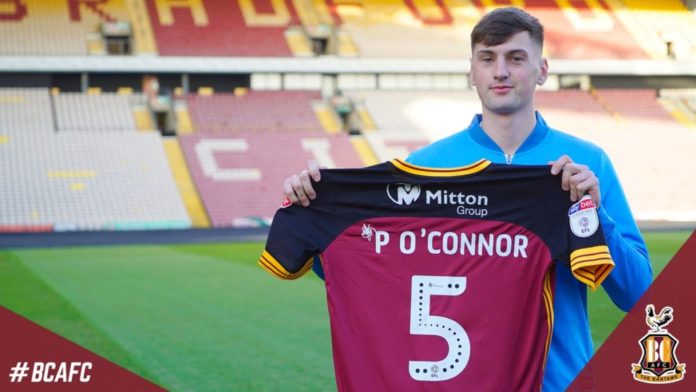 Former Limerick FC defender Paudie O’Connor has signed for Bradford City on a three-year deal from fellow Yorkshire club Leeds United. O’Connor spent the second half of last season on loan at the Bantams and made quite an impact as manager Gary Bowyer appointed him as captain.

A statement on the club’s official website said; “We are delighted to announce that @Paudie97 has signed a three-year deal with the club, keeping him at the @Northern_Comms Stadium until at least the end of the 2021/22 season!”

The club were relegated from League One last season but Bowyer was adamant to re-unite with O’Connor, a player he also signed on loan for Blackpool at the beginning of last season before his abrupt departure. Speaking to Bradford City’s official club website, Bowyer was clearly delighted with the signing:

We are delighted to have secured Paudie on a permanent deal and look forward to seeing him develop even further.

I signed him last year, at Blackpool, and everyone knows what I think of him as a player and a character. In my opinion, he has the desire and ability to play at a higher level.

He displayed great leadership skills when we gave him the captain’s armband at the end of last season. We will need those qualities again in this difficult division.

O’Connor had reportedly turned down moves to clubs in League One in favour of remaining at the former Premiership club and pinpointed the influence of Gary Bowyer as a main reason for the decision.

“This is the best possible move for me. Gary (Bowyer) and I have a great relationship. We compliment each other well and I understand his demands. He plays football the right way so it suits me down to the ground, signing for City.”The powerful centre-back also stated that the main ambition is to help the club return to League One at the first time of asking.

Playing here at Valley Parade in front of the crowd is a great feeling. It played a big part in my decision to sign a long-term deal here. I will do all I can to help us get promoted. I have committed myself to the club and want to concentrate on my football.

The Ballybrown native left Limerick FC in January 2017 to join Leeds United having helped the club to the Airtricity League First Division title the previous season. O’Connor came to prominence as a 17 year old when he made his debut for his home town club in March 2015 in the Airtricity League Premier Division in a 3-0 defeat to Bohemians.

He went on to make 16 appearances that season and many credit his omission in favour of a clearly immobile Patrick Kanyuka, as one of the main reasons that the club were relegated from the First Division that season. Despite his young age, O’Connor was more than capable of mixing it physically with opponents.

In 2016, O’Connor made 23 appearances as Limerick won the league and reached the EA Sports Cup final which they lost to St. Patrick’s Athletic. Trials with Leicester City and Crystal Palace ensued, but O’Connor chose to sign for Leeds United.

He is Bradford’s eight signing of the summer as pre-season nears for the Bantams.