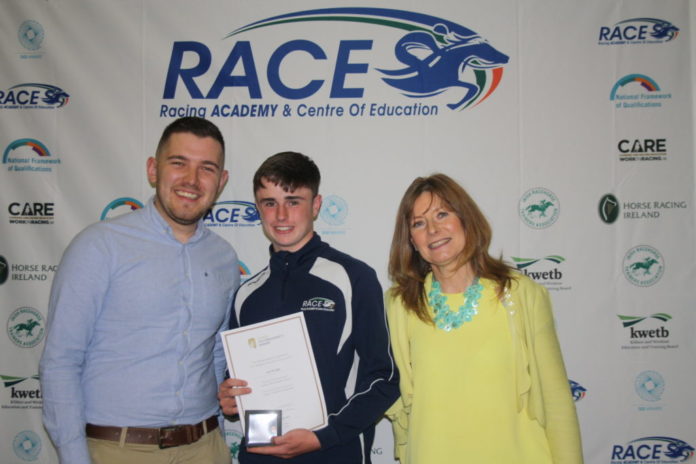 Twenty-three young people graduated from the SOLAS / KWETB Trainee Jockey programme at the Racing Academy & Centre of Education (RACE) recently and most are now proceeding to take up employment in the industry.

There was one graduate from Limerick this year in 18-year-old Jack Enright from Ardagh. Jack completed his work placement with Michael Halford and will aim to follow in the footsteps of other successful graduates like Seamie Heffernan and this year’s Irish Derby winning jockey Padraig Beggy.

Twelve girls were among the group who successfully completed the ten-month residential programme and were presented with their certificates and prizes by John Oxx and Michael Halford at a ceremony on the Kildare campus.

This year’s graduates received a QQI Level 4 award in Horsemanship (Racehorse Care & Riding) along with a bronze Gaisce award for completing all four elements of the personal achievement programme including charity fund-raising and an overnight hike.

Cheques were presented by trainees to three charities – animal rescue My Lovely Horse, the Irish Injured Jockeys and Pieta House – arising from their fund-raising efforts over the year, which included a sponsored Bogathon run.

Nine of the group will be remaining in residence at RACE for another year as they progress their careers and several of them will be taking the opportunity to further their education by completing a Level 5 Horsemanship award on a part-time basis.