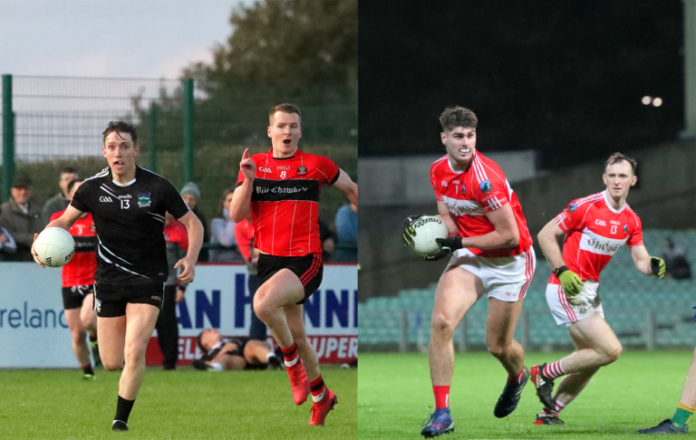 Football. Check. Boots. Check. Toffypop Biscuits. Check! As a youngster in Ballysteen I remember running out the road to watch the junior team – who were preparing for a final – train in a local farmers field.

The session involved runs up a huge hill and a game. I revelled in being in amongst these players, returning the ball after a score or attempting to mimic them by trying to run up that hill.

Toffypops? Well I knew a couple of the players had a liking for them and although it probably didn’t help their conditioning, I wanted to show my support and would bring a couple with me to give to them after (and in some cases during) training.

Different times! In my eyes these guys were legends and I longed for the day I would be able to wear the club colours.

The 20×20 Women In Sport movement have the tagline “If she can’t see it, she can’t be it” and this rings true for most kids growing up. To see the colours in a village or a town, to be able to see their heroes up close, is priceless. After their respective semi final victories, Kem Downey and Mike Quilligan referenced the effect the wins would have on their localities.

Flags would be up in Newcastlewest and kids were going around Oola with footballs. At the Intermediate Final last week, there were hundreds of children decked out in the colours of Gerald Griffins and Galtee Gaels, forming a guard of honour for the teams and also getting a run out at half time. Memories forever. And no better promotional tool.

County final days allow for this, with their primetime slot on a Saturday or Sunday. With this in mind, the scheduling of games is probably an area that the newly formed Football Development Committee need to look at in order to allow these younger club members to see their heroes in action.

There will always be instances where games will take place on a weeknight, but this should be the exception if wanting to increase the footfall at games. Double headers in suitable venues would help aswell. I have been to club championship games in other counties and there is a buzz and excitement around them. Some small changes would help when it comes to our own games.

Overall though the Limerick Senior Football Championship has been well run and given many teams the opportunity to compete in recent years. The meeting of Oola and Newcastlewest will be the 6th different final pairing in the last 6 years.

And Oola’s appearance in the final will mean all four divisions in the county will have been represented in that time. The format of the competition has often resulted in every single game in the final round meaning something, whether that be a place in the knockout stages, or avoiding the dreaded relegation playoff.

In recent years, Limerick GAA TV and Sporting Limerick have brought another dimension to the promotion of the championship by live streaming the games in the group stages and beyond.

It has allowed those who can’t attend, both locally and further afield, to follow the exploits of their club mates, which can’t be underestimated. And the social media coverage of championship and county final launches, including interviews with players and managers, has been a welcome addition.

As for the finals themselves, both promise to be close games. Galtee Gaels and Gerald Griffins are locking horns again just two weeks removed from their draw in Kilmallock.

Walking amongst both sets of players as they left the pitch you got the feeling it was the men from Loughill/Ballyhahill who were the more upbeat, having come back from six points down in the final quarter. But the South Limerick men have had time to get over that and probably played the better football on the day, so it promises to be a close call again.

The senior final pits unbeaten Oola against Newcastlewest, who’s only loss to date was at the hands of the men from the East in the final round of the group stages.

While both teams were missing key men on that occasion, it was a full blooded encounter with both making the most of their purple patches; Oola coming out on top by the minimum after a late run of scores.

Watching on that evening there was a real feeling that both would have a major say in the championship and this has proven to be the case. There are match winners dotted all over both sides and plenty big day experience.

Goals have been a feature of Oola’s performances to date and you feel if they are going to triumph they will need 1 or 2. It’s been 4 years since Newcastlewest claimed senior honours and they will feel this has been too long.

Multiply that by 10 for Oolas last county senior football title so they will also feel the time has come. All roads lead to the LIT Gaelic Grounds this Sunday for this eagerly awaited double header.