Home Rugby Munster Munster earn bonus point win in Thomond as they bow out of... 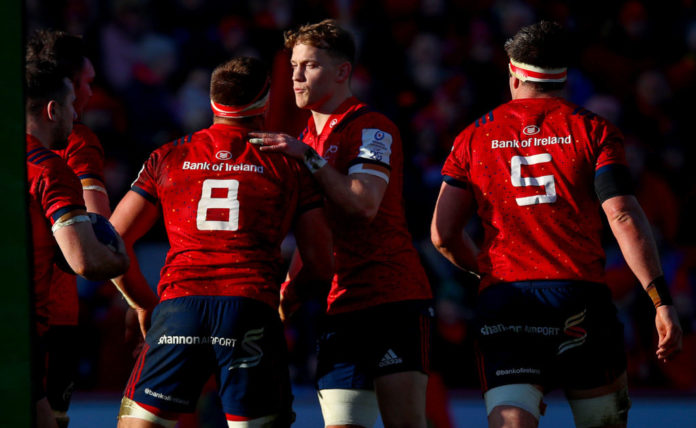 Munster made light work of the Ospreys in Thomond Park today as they earned a 33-6 in their Round 6 Champions Cup tie.

After yesterday’s results in the competition, Munster were aware that this would be their final Champions Cup game of the season.

After a somewhat sloppy start from both sides, Ospreys had the first chance at points which they took as a Luke Price penalty on seven minutes saw them into a 0-3 lead.

Munster had a big let off minutes later as Price intercepted a JJ Hanrahan pass in Munster’s half before knocking on the ball to the Thomond Park faithful’s relief.

Moments later Dan Goggin was introduced in the place of Andrew Conway with the winger undergoing a HIA.

Another Price penalty on 13 minutes pushed Ospreys into a 0-6 advantage.

On twenty minutes the ospreys had a chance to extend their lead but Cai Evans was wide with a penalty from just inside the Munster half.

Munster had a sustained period of pressure in the Ospreys 22 minutes later but it would come to nothing as Ospreys eventually cleared the danger.

A crooked Ospreys lineout inside their 22 gave Munster the ideal attacking platform they badly needed on the half hour mark.

Taking the opportunity that was presented, unster won their lineout and drove at the Ospreys line before CJ Stander crossed the whitewash.

JJ Hanrahan added the extras to give Munster the lead for the first time, 7-6.

This seemed to kick Munster into gear and on 36 they almost added to their lead as Dan Goggin collected a brilliant JJ Hanrahan crossfield kick before being brought down metres from the line.

From here Ospreys conceded a penalty but Munster opted against the three points and instead for a scrum.

However, nothing would come from this as Ospreys stiffled the attack.

They wouldn’t resits for long as Munster had thier second try just before the half’s end with Stephen Archer driving over under the posts after more Munster pressure on the Ospreys tryline.

Hanrahan made no mistake with the conversion under the posts to give Munster a 14-6 lead at the break.

Munster started the second as they finished the first with quick breaks from Mike Haley and Jack O’Donoghue pushing Munster into the Ospreys 22, but the home side were penalised for holding on in the ruck.

It would take until the 47th minute however for Munster to add to their with Conor Murray touching down in the corner after starting the move just inside the Ospreys half.

Hanrahan couldn’t convert what was a very difficult conversion.

Munster looked to have sealed the bonus point on 55 minutes but Rory Scannell spilled the ball as he went to touch down under the posts after a lovely Sammy Arnold offload.

Moments later Mike Haley went pver the line but was held up by a number of Ospreys players.

From the resulting scrum, Craig Casey, who had just been introduced, ensure the BP with a beautiful fake off the back off the scrum.

JJ made no mistake to push Munster into a 26-6 lead.

On his European debut, Healy almost repaid the favour for Goggin with an exception off load but Ospreys funneled the winger into touch.

Calvin Nash would then come close to his first European try but couldn’t reclaim his chip cleanly five metres from the line.

Munster’s fifth try cam e in the 77th minute as CJ Stander added his second off the back of a scrum. JJ extended the lead to 33-6.

This would be the final score of the game as Munster brought a curtain down on their European season.

The post Munster earn bonus point win in Thomond as they bow out of Europe appeared first on Sporting Limerick.