“FIVE performances, five beneficiaries” is the promise from New Hope drama group as they tour Limerick, Cratloe and Tipp with a bedroom farce set in rural Ireland.

2020 is the third year in which this hardworking company has chosen Irish playwright Jim Keary; this year’s love is called ‘For Better, For Worse’. The ‘take 5’ premise is that New Hope performs over five nights, contributing all door proceeds (€10 in) to a different charity each time.

“Jim Keary is very popular and his plays are done all over the world,” says loyal member Alice O’Farrell. She is PRO for New Hope as well as being cast in the role of Chrissie Foley and yes, Keary is huge on the am-dram circuit and is a prolific writer – see jimmykeary.ie for more

Chrissie’s recent marriage to Gabriel Foley (Trevor Askin) is going through an arid patch already. “Things are not going well – in and out of the bedroom. Matters are made worse by Gabriel’s mother Aggie (Pauline Fenton) who is living with them and who treats Chrissie like a dogsbody.”

This tightly knit group began readings and rehearsals back in October but the sudden death of cast member Greg Ryan of Thomondgate in January hit them hard. Greg was loved and respected.

“We just could not work on the play for a while after that. When you become involved in a small group like ours, you become close quite quickly.”

Then move on to February 28 and Na Piarsaigh GAA Club for Brain Tumour Ireland. Next month on March 21, New Hope will head for St  Anne’s Community College in Ballina/ Killaloe to benefit Suicide Watch patrols and support.

Head along to romp with village people for the laugh. 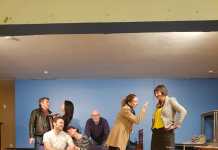 Foodie fundraiser with The Cookbook and crooner Liam O’Brien