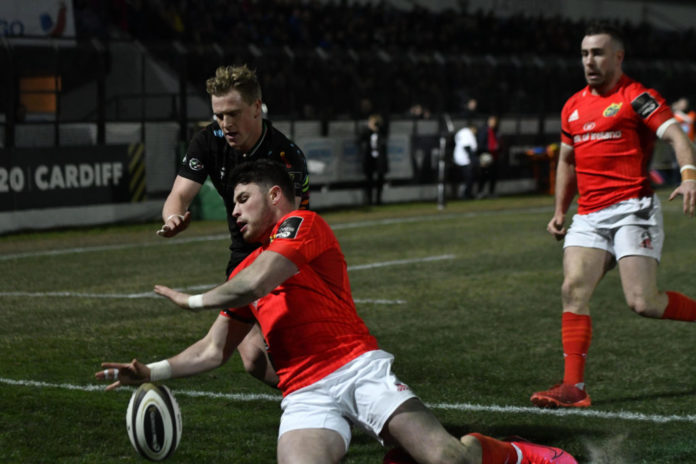 Munster remain in the hunt for a Pro14 home semi final following a 28-0 bonus point away win over Zebre.

However, the Red Army stay in second spot in Conference B after Edinburgh’s victory over Connacht.

Tries from Calvin Nash, JJ Hanrahan, Rory Scannell and Darren Sweetnam (all converted by JJ) saw Munster come away with what ended up being a comfortable win.

Munster’s cause was made slightly easier when winger Pierre Bruno was red carded for a leading with his forearm as he carried into contact with Chris Cloete in the 10th minute.

JJ Hanrahan added the conversion to put Munster 7-0 in front and in firm control of the contest.

Calvin Nash gets the lightest of touches on to Craig Casey’s kick, and JJ Hanrahan adds the extras.#ZEBvMUN #GuinnessPRO14 pic.twitter.com/RWKXWtETDS

Van Graan may have expected his side to dominate from that moment, but things didn’t go to play for the travelling team.

Munster had lots of possession for the rest of the half, but were unable to add to Nash’s try due to a mixture of solid Zebre defence, Munster ill-discipline and some poor execution.

Whatever was said at half time seemed to have the desired effect as Munster were much more patient.

The second try arrived 13 minutes after the restart. Some strong carries from Jeremy Loughman and Rory Scannell created a bit of space and Hanrahan dived over for a try that he also converted.

JJ Hanrahan goes over the line following a sustained spell of Munster pressure, then kicks the extras.#ZEBvMUN #GuinnessPRO14 pic.twitter.com/jAddNn1uj7

That try seemed to spur Munster on and they began to put the foot down on a visibly tiring Italian side.

Some more patient attacking saw Munster in the home ’22 once more and again it was Hanrahan that was key to the score.

With a penalty advantage accruing, the Kerryman floated a pass to the right wing for Scannell to stroll over for the third try.

The Munster out half nailed his third conversion to give his side a 21-0 lead on 57 minutes.

Rory Scannell goes in at the corner. JJ Hanrahan nails the conversion from the right touchline.#ZEBvMUN #GuinnessPRO14 pic.twitter.com/RjrXYMGiRU

After Scannell’s try, Munster’s lethargy returned. Several attacking positions were not taken advantage of and the bonus point looked unlikely.

However, some bit of magic inside the Zebre ’22 from firstly, Loughman, and then an outrageous flick pass by Kevin O’Byrne saw Hanrahan fire wide for Sweetnam to score on his return from injury.

Hanrahan again nailed a superb conversion to give Munster a 28-0 bonus point victory.

Darren Sweetnam scores Munster’s bonus-point try in the left-hand corner. JJ Hanrahan adds the extras with his fourth successful conversion of the evening.