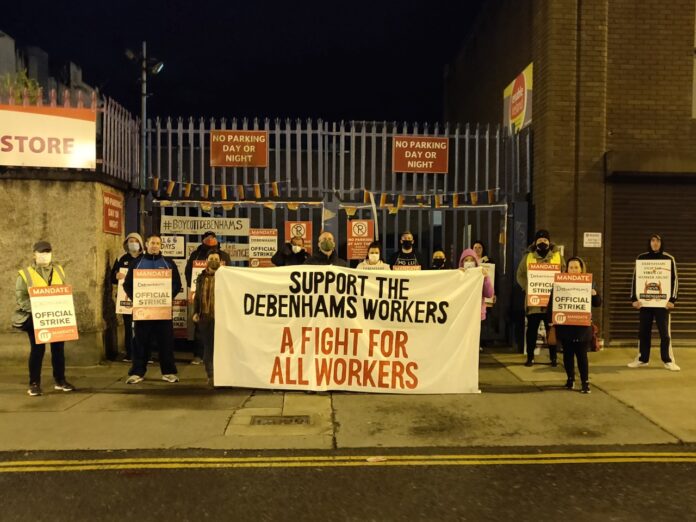 EARLY this Wednesday morning, a Wraptite truck attempted to deliver boxes for packing stock into the Limerick Debenhams store.
Ex-Debenhams workers, who have now been picketing the store for 167 days as part of their fight to demand the payment of their redundancy, were alerted by their 24 hour watch and over a dozen workers and supporters responded within minutes. The truck turned away at the sight of mass pickets without confrontation.
David Vallely, a spokesperson for the Socialist Party who have been supporting the workers in their stand, said that it represented “a victory for the workers.”
He went on to say:
“The liquidators KPMG and government must be made to realise that there is no resolution to this dispute other than for them to concede to pay the workers what they’re owed.
“Tonight represents a show of strength on the part of the workers. Over six months on in this struggle and they are still able to respond within minutes to an attempt on the stock at 2 o’clock in the morning. It’s clear that the workers are not bluffing when they say that pickets will remain on the shops 24 hours a day, 7 days a week and that no stock will be allowed to leave until they are given guarantees of a just settlement.
“KPMG and the government have tested the resolve of these workers and they have not been found wanting. It’s time the government ended this dispute, which has gone on far too long, by acting to ensure that the workers are paid the 2 weeks pay per year of service Debenhams owe them on top of the 2 weeks per year they are statutorily entitled to.
“The tactic of liquidating companies to avoid paying redundancy is a particularly callous act on the part of unscrupulous employers, and a victory for Debenhams workers would represent a victory for all workers in facing down these rotten but, for now, perfectly legal practices.”