Home Business ‘What Are You Saying? … And why you’re not saying it’...

As a journalist, you understand what George Bernard Shaw meant when he said, “The single biggest problem in communication is the illusion that it has taken place”.
Many don’t – often those in positions of power, influence and authority.

A new, and fourth book, by Conor Kenny, explores this subject in all aspects of life, work, and play. From social to serious, late night wine spilling over furious keyboards tantrums to volcanic losses of self-control and pirates getting into positions of power pumping out toxic messages, cryptic to clear.
What did you think were you saying? What was received? What were the consequences?

It is not an academic or prescriptive book but one full of true stories based on Conor’s experience over 40 years. 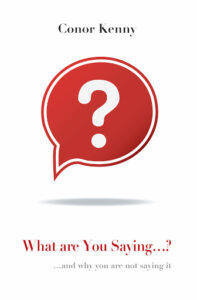 What you see, what you hear, and what you believe depends on where you stand – your perspective, your agenda.
Why something has not been heard or said has a lot to do with emotions, denial, the choice of words and what people want to hear and believe. Add in our own inner conflicts, politics, cultures, values and the cocktail can be dangerous.
That’s the challenge of communication, what we meant to communicate is what is received and that we are, in fact, saying it.

The recurring theme of this book is to understand the impact of how we communicate.
The impact on friends, family, acquaintances, and those we work with.

In this book, every short true story has a communication message and moral.
It reinforces the importance of being understood, being clear and avoiding the unnecessary rubbish of clichés, slang and jargon.

Most of all, it seeks to make sure that whatever the communication, it actually gets said and takes place.

Conor Kenny is the founder and principal of Conor Kenny & Associates, a multi award winning professional development and training company.

He is the author of.

He is a former fundraising volunteer for Debra Ireland.
He is a director and board member of The Rutland Centre (addiction treatment)

The book is out now and published by Oak Tree Press