PARENTS in Limerick are not having their children vaccinated against the flu in the numbers that were expected.
According to local family doctors, the take-up of the free, painless vaccine – which is administered by nasal spray – has been very disappointing.

“This is the highest flu vaccine uptake ever recorded by the hospitals. The UL Hospitals Group is actively working towards the national target of 75 per cent vaccination for healthcare workers,” Prof Cowan added.
The numbers indicate that there has been  a 120 per cent increase on the same five week vaccination period in 2019.
In answer to a query from the Limerick Post, the HSE said it does not have data on the uptake of the new children’s vaccine but said that 600,000 doses of nasal flu vaccine have been procured so far this year.
“All sites that placed an order for the vaccine received their first delivery by the October 9. To date, more than 75 per cent of the vaccine has been distributed to GPs and pharmacies for administration to children between two and 12 years of age,” a HSE spokesman explained.

“As of November 18, at least 122,000 doses of the children’s vaccine have been given.
“With less than three weeks left of the school term and understanding the challenging circumstances schools find themselves with Covid protocols and limited space for vaccinations, it is not possible to provide the flu vaccine in schools this year,” the spokesman added.
At a meeting of the Health Forum West last week, Chief Officer for HSE Mid West Community Healthcare Maria Bridgeman, said that 60 per cent of heath care workers in the region have been vaccinated.
“Clinics are on-going across the area and the figure of 60 per cent uptake is expected to increase in the weeks ahead,” she said. 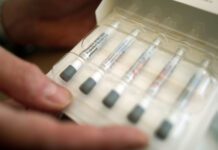