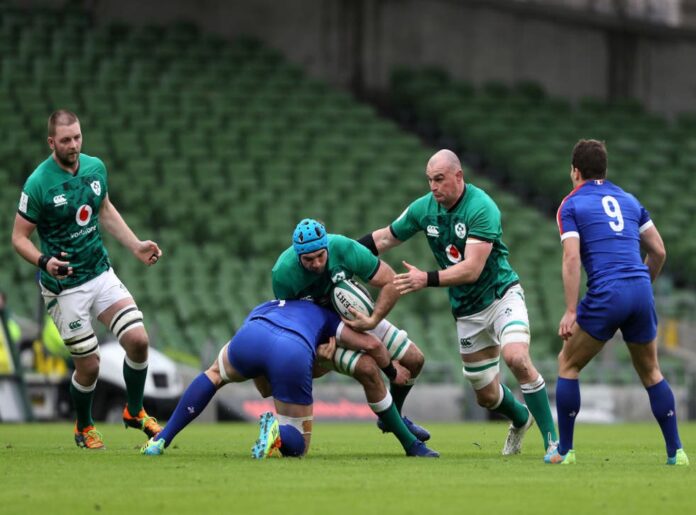 IRELAND put in another respectable performance at the Aviva Stadium yesterday afternoon, going toe to toe with a fantastic France side for eighty minutes.

Paul O’Connell’s pack put in a quality display and their bright start helped Ireland take the initiative. Ireland’s forwards applied themselves with determination throughout and proved a particular nuisance to the opposition lineout.

However, a couple of magic moments from France were always to be expected. In the end, a beautiful team try before half time finished by Charles Ollivon and a second half score from Damian Penaud made the difference. Scrumhalf Antoine Dupont set the tempo throughout with his delightful array of skills adding variety and flavour to the French attack. Ireland’s scrumhalf Jamison Gibson-Park put in a good shift himself but against the best nine in the world and aerially assured fullback Brice Dulin, France were never under too much pressure from Ireland’s kicking game.

Much like last week Ireland take away plenty of credit and executed their basics well. A lack of invention in the backline is fast becoming theme however and one that needs to be addressed quickly by Mike Catt should Ireland take any points away from their Scotland and England fixtures.

After France’s excellent finish to the first half, it only took them until the 54th minute to score their second.

James Lowe, similarly to last week against Wales’s Louis Reece Zammit, was beaten on his wing allowing Clermont Auvergne danger man Penaud to dart over. Ireland had been under the cosh for the minutes leading up to the try and things were beginning to look ominous. Some respite was afforded when Mathieu Jalibert was unsuccessful with the conversion but the score still stood at 3-15.

Although Ireland started brightly and Paul O’Connell would have been pleased by the lineout and scrum performance the whole way through, France’s efficiency with ball-in-hand compared to Ireland was beginning to show. Much of Ireland’s play hovered around the halfway line whereas the likes of Jalibert and Fickou looked dangerous with every touch of the ball for the visitors.

There was a lifeline thrown Ireland’s way when a lineout inside France’s 22 went astray before falling fortuitously into the path of substitute hooker Ronan Kelleher. Kelleher, who has been prolific for Leinster this season, showed good pace to make his way over in the corner and Ross Byrne converted impressively in the conditions.

For the closing 20 minutes France led 15-13 but in truth never looked in great danger. Much of the territory belonged in Ireland’s own half and bar half-breaks from Garry Ringrose, Keith Earls and James Lowe, the home team never looked like fashioning an opening.

The game ticked into the 80th minute with Ireland in possession but there was to be no repeat of Johnny Sexton’s 2018 ‘Le Drop’. After huffing and puffing forty metres out from the French line Ireland eventually lost possession to Antoine Dupont who allowed another standout performer Brice Dulin to kick it out for a French victory.