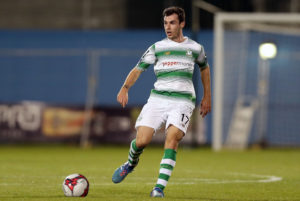 TREATY United began life as a senior men’s team with a credible 1-1 draw against Waterford FC at Waterford Institute of Technology on Tuesday night.

Treaty began brightly as Sean McSweeney hit the crossbar with an early shot. The lively Joel Coustrain forced Matt Connor into a fine save before the former Shamrock Rovers winger made history by scoring the club’s first senior men’s goal after 16 minutes as he pounced on a Connor mistake to score from close range.

Tommy Barrett’s side had the chance to extend their lead in the second half when substitute William Armshaw hit the crossbar. Waterford scored their first goal under the reign of former Irish international Kevin Sheedy when John Martin converted from a free-kick delivery.