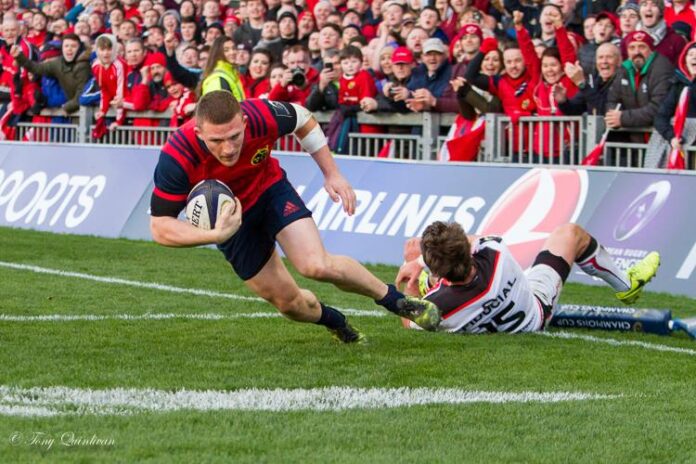 It will be do-or-die for Munster with their season on the line against the French giants.

Munster lost out in the Pro 14 final to Leinster over the weekend and their season will come to an end should they lose this weekend.

Ahead of the clash between the six times champions, take a look at their previous five meetings which includes a final and a pair of semi-finals.

Munster reached a first Heineken Cup final as they upset pre-match favourites Toulouse in a dazzling perfromance in Biarritz.

John Hayes had the games first try in the first half for Munster but their indiscipline was proving costly as they allowed Toulouse into the game with five penalties.

That gave Toulouse a 15-11 lead at the brak as Ronan O’Gara kicked over a brace of efforts.

Munster outscored Toulouse 6-3 in the third quarter but the French side did hold a one point advantage as Munster were restored to their full compliment as Mike Mullins spent ten minutes in the bin for a deliberate knock on.

With 15 men on the field, Munster showed what they could do and scored a brilliant end to end try with O’Gara dotting down and converting.Minutes later, an intercept from Jason Holland allowed him to walk in for Munster’s third try to move them 13 points clear.

Toulouse did manage a consolation try but the day belonged to the men from Munster as they looked forward to a first final against Northampton three weeks later.Accept YouTube Content

Munster fell to a second one point Heineken Cup semi-final defeat in three years as they came up just short against eventual champions Toulouse.

Against the star studded French outfit, Munster relied on their powerful forwards to suffocate their opponents and did so successfully for large portions of the game.

11 minutes in, Munster had their first chance at points but chose to kick to the line instead of for the posts. They took in the lineout but were unable to penetrate the French defence with O’Gara kicking over a drop goal for a 3-0 lead.

Their lead was out to six on 20 minutes as O’Gara kicked over a penalty just inside the 22.

Yann Delaigue had Toulouse’s first chance for points but his penalty after a half hour dragged wide. He did get the French side off the board on the stroke of half time to leave his side trailing by just 6-3.

Two minutes into the second half and O’Gara’s second drop goal of the game pushed them back into a six point lead.

Substitute Jean Baptiste Ellissalde’s penalty on 56 minutes reduced the margin but O’Gara’s second penalty had it at 12-6 in Munster’s favour with twenty minutes to play.

But with the Toulouse pressure mounting, the Munster defence eventually succumbed as Frederick Michelak crossed for the games opening try as Ellisalde’s conversion brought them a point ahead.

O’Gara had two more chances to snatch the game but both drop goals faded wide late on as Toulouse advanced to a first final since 1996.

Munster claimed a second Heineken Cup title in three years as they outlasted Toulouse in an absorbing final encounter.

Toulouse had the first opportunity of the game but Jean Baptiste Elissalde’s penalty was wide of the mark after five minutes. But they were off the board three minutes later as he kicked a drop goal.

Toulouse dominated the early exchanges but after a half an hour Munster finally found themselves in the Toulouse 22. Denis Leamy got over the try line but was unsuccessful dotting down as he knocked on the ball in the process.

Munster’s No.8 made no mistake a couple of minutes later as he crossed the line for the games first try after 33 minutes. Ronan O’Gara kicked the extras.

O’Gara had his first penalty of the day to move Munster seven clear but Ellissalde’s effort on the stroke of half time left it at 10-6 in Munster’s favour at the break.

An electric finish from Doug Howlett looked to have Munster clear ten minutes into the second half but Rua Tipoki’s pass was adjudged to have gone forward in the build up.

Moments later, O’Gara kicked his second penalty of the game after Toulouse’s Fabien Pelous was sent to the bin.

But 14-men Toulouse replied three minutes later as a piece of Cedric Heyman’s brilliance set up a try for Yves Donguy. Ellisalde kicked the conversion to level proceedings after 54 minutes.

Four minutes after his return to the game, Pelous was penalised for not rolling away and O’Gara made no mistake from the penalty to give them a three point advantage with 15 minutes to play.

Munster held onto the ball for the best part of the next 12 minutes but turned over posession in the 77th minute to give Toulouse one more chance.

But Munster were able to retrieve the ball and held out for a historic second success.

Six tries from the home side saw Munster into a second consecutive Champions Cup semi-final as they demolished Toulouse 47-23 in Thomond Park.

Munster had their first score inside five minutes when Simon Zebo fed Keith Earls in the corner with Ian Keatley making no mistake from the tee.

A Luke Macallister penalty had the French side off the mark. He and Keatley exchanged a pair of penalties each in the remainder of the half as Munster took a 13-9 lead to the dressing rooms.

A they did in the first half, Munster started with real intensity and Dave Kilcoyne dotted down within a minute of the restart. Four minutes later and CJ Stander added his name to the scoresheet after replacing the injured Peter O’Mahony.

Hosea Gear pulled one back for the hosts in the 53 minute but Keatley replied with a kick. Casey Laulala then found space out wide to get Munster’s fourth of the day.

The French had the next score with Iosefa Tekori crossing the whitewash in the 71st minute. But Munster were far from finished and added two more tries from Simon Zebo and Paul O’Connell in the final ten minutes to finish off a near faultless perfromance.

Munster moved into a 12th European Cup semi-final final as late tries put a gloss on a deserved 41-16 victory over Toulouse in Thomond Park.

An early sinbinning to Francois Cros would prove detrimental to the French side as John Ryan dotted down and Tyler Bleyendaal added five more points to leave them 10-0 adrift upon his return to the field.

Toulouse were much the better on his return and added three penalties in the remainder of the half with Bleyendaal kicking one to leave it 13-9 in Munster’s favour at the half.

But with the aid of a breeze for the second period, Munster added to their lead immediately with Bleyendaal kicking his third penalty of the day before CJ Stander got in on the act with a try minutes later.

A Bleyendaal penalty on 53 minutes had Munster’s lead out to 24-9. But Toulouse responded with a try from Paul Perez and a penalty from  Jean-Marc Doussain to reduce the deficit to eight with 25 minutes to play.

But Munster would hold out their visitors and added late tries from Darren Sweetnam and Andrew Conway to guarantee progress into the semi-finals.