Home Rugby Munster Fan favourite O’Donnell will leave a hole in the heart of Munster... 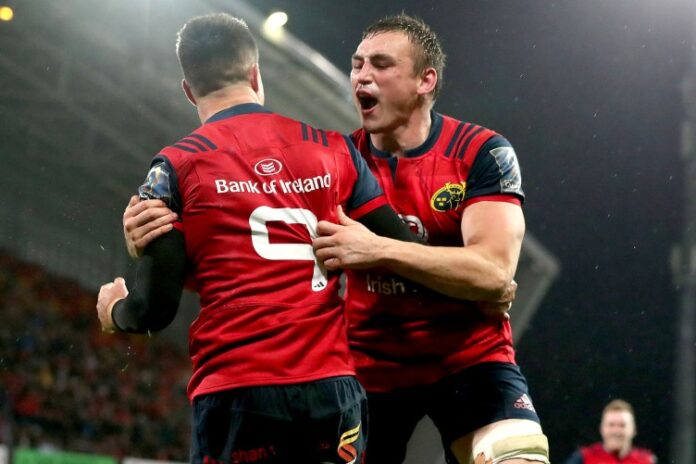 “I’m proud to know that I will retire as a one-club man. I am confident and content in my decision, having chased the dream from the age of 16 through the youths, underage and academy systems to represent Munster and Ireland.”

MUNSTER flanker Tommy O’Donnell announced this Monday that he will be hanging up his boots at the end of the season.

Cahir native O’Donnell made his debut for Munster in September 2007 against Scarlets and has gone on to make 186 appearances for his home province. O’Donnell cemented himself as one of the first names on the team sheet for almost a decade, usually starting alongside Peter O’Mahony and CJ Stander in a formidable backrow.

In addition to his outstanding Munster career, O’Donnell also won 13 caps for Ireland. The UL Bohemians clubman deputized at openside flanker for Sean O’Brien under Joe Schmidt and won Six Nations Championships in both 2014 and 2015. He was unfortunate to miss out on the 2015 World Cup after dislocating his hip in a warm-up match against Wales but came back better than ever in the 2016/2017 season when Munster made it all the way to the Champions Cup semi-finals and the PRO12 final.

The dynamic Tipperary man started in Munster’s emotional 38-17 victory versus Glasgow Warriors the day after Anthony Foley’s funeral and captained the province to another famous win two weeks later against the Maori All Blacks. Few players in Irish rugby played to such a consistently high standard in that period as O’Donnell’s industrious and impactful displays acted as the heartbeat of Munster’s performances under Rassie Erasmus.

Although he has often been overlooked in the presence of Ireland and Lions stars like Conor Murray, CJ Stander, Keith Earls and Peter O’Mahony; Tommy O’Donnell will still go down as one of Munster’s great clubmen. The phrase ‘train like Tommy’ has been used around UL and his super-human commitment both in the gym and on the training field is no great secret at this point. The hours he put in from Monday to Friday for fourteen seasons were reflected in his freakish athleticism each and every matchday. If there was a ruck to be hit, he hit it. If there was a tackle to be made, he made it. Munster’s pack are a well-oiled machine on their day and since David Wallace’s retirement in 2012, Tommy O’Donnell has well and truly been the engine.

Like CJ Stander and Billy Holland, O’Donnell will sadly retire at the end of this season without a Thomond Park send-off – and last week’s defeat to Toulouse means there will be no dream ending in the Champions Cup either. He is however still motivated to contribute as positively as possible in the upcoming Rainbow Cup competition before transitioning to life as a Munster supporter.

“While it is not the end just yet and I’m very much looking forward to contributing to the team in the final part of the season and new competition ahead, I felt the time was right to make my intentions to retire known.

“My family and I are looking forward to the new chapter ahead. My passion and belief in Munster Rugby will always remain unwavering. I look forward to looking on as a supporter and bringing my boys to experience the magic of a packed Thomond Park in the years to come.”

The post Fan favourite O’Donnell will leave a hole in the heart of Munster Rugby appeared first on Sporting Limerick.