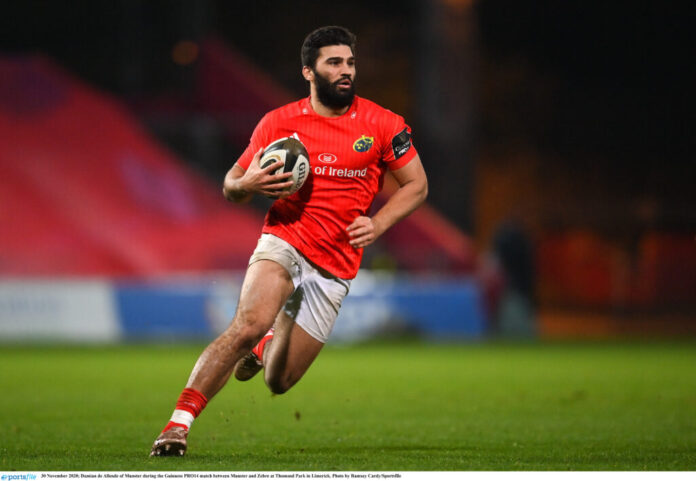 WHEN Munster confirmed the signing of Damian De Allende last Summer supporters were full of excitement and expectation.

The former Stormers centre has been capped 47 times by South Africa and won the Rugby World Cup in 2019 under the guidance of Rassie Erasmus.

The 29 year-old is world renowned for his brutal physicality and was viewed as the kind of addition that could elevate the province to the next level.

Unfortunately, Munster have so far been unable to end their ten year trophy drought. Despite a magnificent performance from De Allende, Toulouse managed to outscore the men in red at Thomond Park in the Champions Cup last sixteen and beating a full-strength Leinster still proved evasive in the PRO14 final at the RDS.

Solid and reliable throughout the league season and explosively brilliant in the past month, to his credit De Allende could not have done much more to steer the province towards silverware.

The longer the season has gone on, the greater the Springbok’s influence has grown and Munster supporters will be hoping to watch him flourish in the flesh at Thomond Park next season.

What separates De Allende from the crowd is his surprisingly dynamic skill-set and excellent athleticism. In the last month or so the Springbok’s full array of weapons have been on display as he has combined his combative style with line-breaks and a touch of creativity.

Munster have often relied on gaining momentum through the forwards to kick-start attacks but with De Allende in the team, Johann Van Graan’s side have a new outlet that allows them create tries out of absolutely nothing.

In both the Leinster Rainbow Cup game and against Toulouse, De Allende made stunning linebreaks that led to Munster scoring. Keith Earls benefitted from De Allende’s rapid running game on two occasions against the French giants and Conor Murray finished a beautiful move started by De Allende against Leo Cullen’s Leinster.

Partnered with Chris Farrell in the centre, the Springbok is ordinarily utilized as a battering ram but his game-changing moments of brilliance make him worth every last penny for Munster.

De Allende and his teammates will be hoping to reproduce some of those moments against Ulster in the Rainbow Cup this Friday evening (8.15pm ko). Last month Munster coaches Johann Van Graan and Graham Rowntree underlined their determination to give the Rainbow Cup full respect and they successfully opened their account with a convincing 27-3 defeat of a weakened Leinster team.

Ulster are expected to pose a greater challenge, however. Dan McFarland’s side will be hoping to bounce back from a stinging 33-24 loss to Leicester Tigers at Welford Road. Ulster had eyes set on winning the European Challenge Cup but now, like Munster, will have to direct their full focus towards the Rainbow Cup.

The good news for Munster is that another Springbok superstar, RG Snyman, could be available to feature at Thomond Park. 6 foot 8 second row Will Skelton had an enormous influence for Ronan O’Gara’s La Rochelle against Leinster last weekend and Snyman has the capacity to be every bit as powerful and influential for Munster.

Munster have produced an abundance of home-grown talent in recent seasons with the likes of Craig Casey, Ben Healy, Gavin Coombes, Shane Daly and many others enjoying superb campaigns – but if this season’s Champions Cup has shown anything it is that you don’t win trophies without one or two monstrous units among your options.

In other words, as long as Damian De Allende and RG Snyman are on Munster’s side, trophies will never be far away.