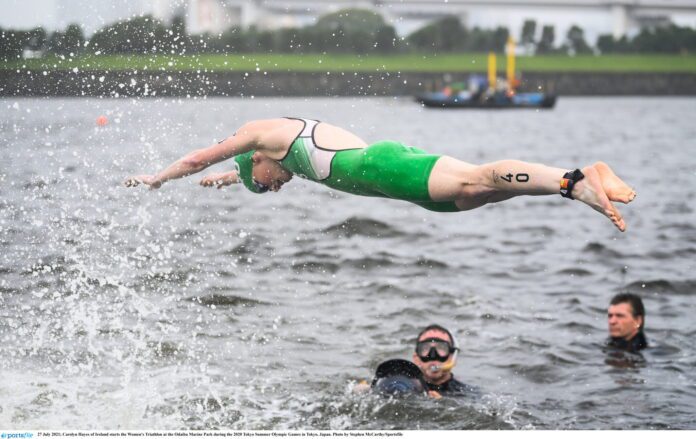 LIMERICK triathlete Carolyn Hayes has said that representing Ireland at the Olympics is a ‘dream come true’.

The 33-year-old Newcastle West woman performed valiantly into the early hours of the Irish morning, finishing 23rd with a time of 2:02:10.

Hayes said that the race didn’t get off to the best of starts for herself early on, putting it down to an unlucky decision.

“I was starting left side of the pontoon, the key is to just hold your line and eventually the groups will form. I held a straight line and I had to make a decision to go with the left side or continue with the right. I continued with the right and it ended up being the wrong decision.”

In treacherous conditions, Hayes really impressed as the race went on.

As you can see from her splits below, there was little stopping her of finishing as high as possible.

Hayes, who put her career as a doctor on hold to pursue her Olympic dream and train full-time, can be proud of her showing.

The rocky start was the last thing she needed but she dug deep to finish with a flourish, something everyone watching at home loved to see.

A relative latecomer to the scene, she first took up triathlon at the age of 25 and as she mentioned in an interview, she always wants to be one of the best with anything she does. Something to be admired.

Even though Hayes had ‘mixed emotions’ after the race, she was conscious of taking a step back to look at the big picture.

“I’m absolute thrilled though. If you told me even two years ago I’d be on the start line of the triathlon at the Olympics, I wouldn’t believe you. It’s a dream come true.

“I can’t quite believe it. The Olympics is the pinnacle of all sport, so this really is a dream come true. I only ever wanted to be a doctor so to be an Olympian is a massive bonus.”

There were some complaints from viewers of the race on RTÉ about the lack of commentary coverage based on Carolyn.

Irish commentator Ryle Nugent cleared it up, citing the fact that he was commentating for a worldwide brand that RTÉ uses.

“Taken a bit of flak for not mentioning Carolyn Hayes more in triathlon commentary. I get the frustration for those watching on RTÉ but I’m working for the world feed which RTÉ chose to broadcast (many other broadcasters worldwide similarly). That means no favouritism!”