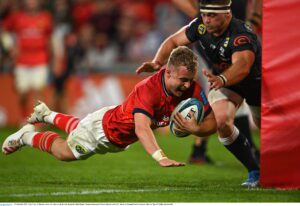 MUNSTER Senior coach Steven Larkham and Dave Kilcoyne reflected on the Sharks win and the returns of Simon Zebo and RG Snyman.

Munster scored six tries over their visitors in the clubs maiden fixture in the United Rugby Championship, which saw the return of Munster legend Simon Zebo and World Cup winning Springbok RG Snyman as Larkham said,

“Special mention to Simon Zebo, I thought he had a fantastic return to the Munster jersey. Then RG Snyman, first game after a horrendous twelve months for him so it’s good to have those guys back out there.”

Steven Larkham on last weeks clash with the Sharks

Larkham was also full of praise for Munster scrum-half Craig Casey, who was hard to ignore during his stand-out performance against the Sharks last Saturday. Casey controlled much of Munster’s attack from the number nine jersey, scoring one try and was even awarded man-of-the-match.

“I’ve only been here a couple of years and I’ve always seen the same side of Craig… very diligent with all of his off-field work, prepared extremely well for field sessions and games, it was kind of inevitable that he would get an opportunity.

Last Saturday’s clash with the Cell C Sharks was the first time supporters were reintroduced to Thomond Park since the beginning of the Covid-19 pandemic. Munster front-row Dave Kilcoyne commented on the difference in atmosphere the fans made.

“It was unbelievable to get back playing and very fortunate to play in front of the fans. It’s been such a long road since we’ve had Munster fans back there, it was unreal.”

Dave Kilcoyne on the return of fans to Thomond Park

Kilcoyne also shared his thoughts with regards to the return of lock RG Snyman, who played his first game in over twelve months due to injury, making his second ever appearance for Munster on Saturday.

“He brings a huge amount of experience and he’s a world class player, he looks like something out of the WWE… He’s been incredible for us, to have that size and that power in the row and you just see what he can do with the ball… He can do things that I haven’t seen too many players do, so for us to have him is incredible.”

Munster return to Thomond Park this Saturday to take on the DHL Stormers in the second round of the URC.

Watch the interviews with both Steven Larkham and Dave Kilcoyne below:

The post WATCH: Larkham and Kilcoyne reflect on Sharks win, Craig Casey and the return of RG Snyman appeared first on Sporting Limerick.