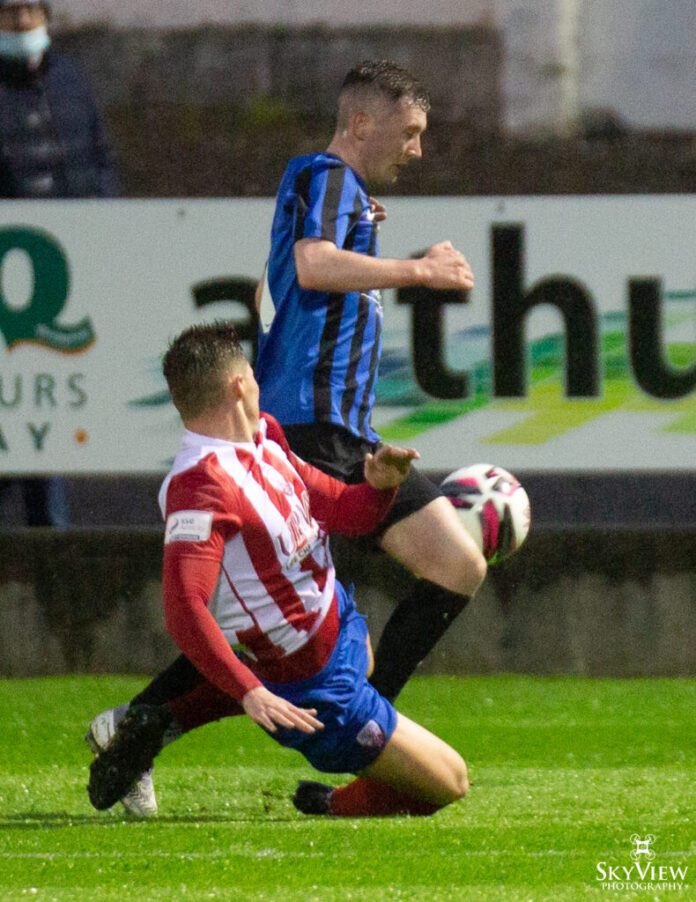 TREATY United welcome Athlone Town to the Markets Field on Friday night knowing that a draw will mathematically guarantee a place in the Airtricity League First Division promotion play-off places (7.45).

As it stands, the Limerick side are currently 5 points ahead of tomorrow night’s opponents but are helped by a much better goal difference than the Midlanders. Treaty currently have an 18-goal advantage with three games remaining, while Athlone have just two games to play.

Due to the presence of UCD players in the Ireland U-21 squad, last week’s encounter at the Belfield Bowl was postponed, giving Tommy Barrett’s side a break from league action. Athlone Town earned a hard-fought draw with champions Shelbourne at Tolka Park with Stephen Meaney grabbing the equaliser in 1-1 draw to keep their faint hopes of reaching the play-offs alive. Friday night will be the final home game to take place in the regular season at the Garryowen venue and Treaty will be hoping to finish with a victory. With just one win in their last five games, the home side will be looking to finish with a flourish in front of a growing fanbase.

Credible draws against the likes of Galway and in-form Cork side have provided the foundation with steady defensive displaying being a hallmark of Treaty’s play all season with the team boasting the third best defensive record in the league. In another welcoming development, centre-back Sean Guerins has returned to training in recent weeks although striker Matt McKevitt remains side-lined.

Both sides have met on two occasions already this season with Treaty emerging victorious on both occasions. In the opening encounter at the Markets Field, a solitary Jack Lynch goal was enough to secure a 1-0 win. In Lissywoolen, Treaty produced one of their best attacking displays of the season as they won 1-4 and scored some superb goals including a spectacular shot from Lynch and a great team goal finished off by Marc Ludden.

Sporting Limerick soccer analyst Noel O’Connor is wary of the threat Athlone will pose and said the team is solid under new manager Paul Doolin.

“I watched the Shelbourne and Athlone game last week and Athlone were bright enough in the game. The one thing that has happened since Paul Doolin has taken over is they are not conceding goals at the rate that they were previously. They will be up for this game and realise that three points will certainly put huge pressure on Bray.”

Tommy Barrett is expected to refrain from making many changes from the narrow defeat to Shelbourne last week although Kieran Hanlon will be expected to start following his substitute appearance in Dublin. Jack Lynch sat out the game but is expected to return to the fold tomorrow night.

In other news, the club announced the departure of Senior Women’s manager Niall Connolly following a wretched run of form in the Women’s National League. Treaty are four adrift at the foot of the table and were heavily defeated by Peamount in their last outing. It was Connolly’s first season in charge and even though many players received international caps this season, the run of form since July was worrying. Former Ballynanty Rovers manager Donal Magee will take temporary charge of the side along with Mike Aherne until a permanent successor is found.

There will be very little time for Treaty to dwell on the decision as they host title challengers Shelbourne at Jackman Park on Sunday afternoon (2pm).

The post Treaty’s Play-off Place in Reach Ahead of Athlone Clash appeared first on Sporting Limerick.