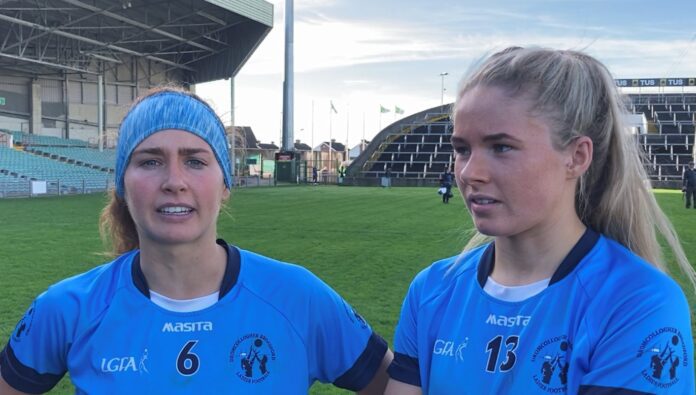 DROM Broadford retained their Limerick Intermediate title with a three point win over Oola on Sunday.

After being denied promotion to the top tier due to the Covid pandemic, Drom Broadford retained their intermediate title to ensure progression to the senior ranks in 2022.

Reflecting on the 1-10 to 2-4 win over Oola in the TUS Gaelic Grounds, Niamh McCarthy said it was a unique achievement for the club

“I don’t think many people can say they’ve won an intermediate championship back to back so I think it’s something we’ll hold onto forever.

Aine Cunningham not only captained the side to a second successive title but was also named player of the match in a brilliant display.

And despite their attacking prowess, Cunningham highlighted the importance of their defensive efforts in claiming the title.

“The last time we played Oola it was the exact same, it was never easy but in the end we pulled away with it luckily. Thanks to the girls working so hard in the backs, the backs had such a tough game on them but we got through in the end. – Aine Cunningham

There is a quick turnaround for the Drom Broadford Ladies who are in Munster club action this weekend. They are away to Kerry outfit MKL Gaels on Friday with a share of the side also facing into a county camogie final with Killeedy on Sunday.

Looking ahead to the Munster club championship Niamh McCarthy said there is room for improvement.

“We’re looking forward to the Munster Championship, I’m sure we’ll sit down on Tuesday night and watch this game, we’ll have to correct errors that we had today, it wasn’t a perfect game on our behalf whatsoever, but we’ll have to push on again.” – Niamh McCarthy

The post “We’ll have to push on again” | Drom Broadford’s Niamh McCarthy and Aine Cunningham look ahead to Munster Championship appeared first on Sporting Limerick.