Home Limerick “Perspective is everything” | Cian Lynch on switching off, winning awards and... 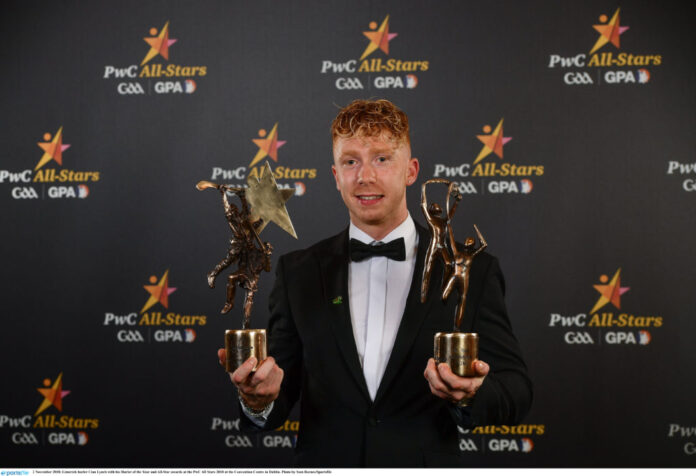 On Friday evening Cian Lynch became only the second player to win the GAA/GPA Hurler of the Year award, beating out teammates Kyle Hayes and Sean Finn to the gong.

And while his 2018 season catapulted him into the national spotlight, his performances this summer have many arguing whether he can go on to become the best of all time, with some proclaiming him as Limerick’s greatest.

But for the best player in the land, the importance of switching off from the game is not lost as he outlines how he has only picked up the hurley twice since Patrickswell were beaten in the county final in October.

“I only picked it up to play the two league games with NUIG as I said. Played a bit of music, chilling out, going for a few walks or just meeting the lads there locally, going into gigs locally. That’s my downtime and switching off is important.

“It’s massively important. Even in the thick of things you need to be able to step away, perspective is everything. There’s other important things in life. Sport gives us all, I suppose me personally, massive purpose in life but you do need to be able say to yourself, I do need to relax, meet the lads and chill out. Its massively important because you can get consumed. You can end up sacrificing meeting the lads because you want to do that extra bit. So it’s important to be able to say to yourself, ‘be no harm to relax and chill out tonight’. Just enjoy life, that’s what it all comes back to.”

It doesn’t take much viewing to understand just how brilliant Lynch is as a hurler with his suite of skills unmatched in the country.

But one thing that stands out from his game is the enjoyment that he plays with, a sort of abandonment of someone doing something they love.

And that is the key to the game for Lynch as he encouraged everyone to not only enjoy the game of hurling but to try out all sports.

“Enjoyment is everything. In life you have to enjoy the things you are doing. We grow up playing sports, for me it was soccer and hurling but for young boys and girls you have to enjoy your hobbies. You’re putting so much time into these hobbies that you need to go out looking forward to playing and coming home saying, ‘by God I had great craic, great fun’ and I think that’s the important thing.

“I know we get caught up in the emotion of winning and losing but we need to be able to look back and say yeah I enjoyed that. That’s what I try to do is have fun.

“Any kid should try and get involved in as many sports as possible. you learn so many skills, aside from the skills of the sport. Social interaction, you’re meeting people from other parts that you mightn’t have had the opportunity to meet and you learn from each other. It’s a way of building your character.”

In August Limerick retained their All-Ireland title for the first time and last week Lynch and co were permitted to return to training as focus will soon shift to a potential three-in-a-row.

For Lynch, it will be his eight season involved with the senior Limerick side but the hunger and desire remains the same with the camaraderie within the squad still at a high.

“Yeah, the only reason you play the sport is to go training and meet the lads so I think we are all looking forward to getting back on the horse and pushing each other again.

“We know next year is going to be a massive battle. There’s nine or ten teams there that all have a massive part to play in the championship so looking forward to it.”

The post “Perspective is everything” | Cian Lycnh on switching off, winning awards and getting back on the horse for 2022 appeared first on Sporting Limerick.