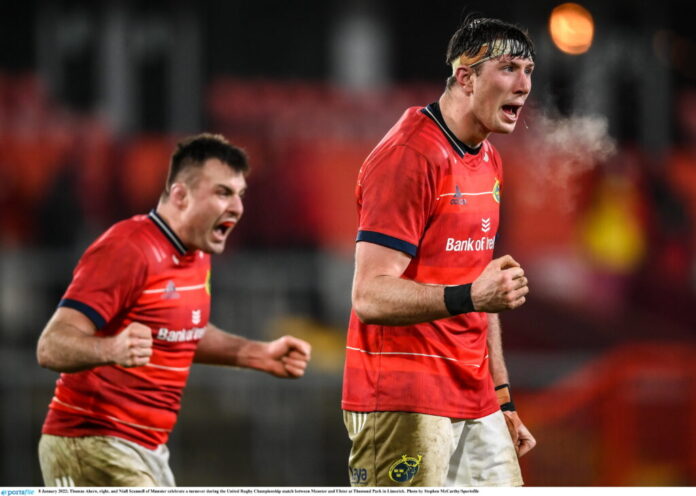 MUNSTER look to continue their form in France this weekend after promising inter-provincial win against Ulster.

Ultimately, Munster prevailed against Ulster in the URC at the weekend but it was not made easy for them by Dan McFarland’s promising outfit.

The home side struggled to find their rhythm conceding a try after just eight minutes from Rob Herring with Simon Zebo seeing red minutes later for a high tackle.

The game looked to be slipping from the men in red but composure was evident as a couple of key penalties were struck by Jack Crowley as half time was beckoning.

The home team managed to weather the second half storm until Ulster substitute Kieran Treadwell hit a nasty dump tackle on Shane Daly and saw yellow for his actions. Munster did not delay on the now even game when Craig Casey swiftly moved the ball through the back line and found Mike Healy waiting by the sideline to have a relatively easy finish in the corner.

Putting the Ulster men under pressure, the ball was scrambled Munster substitute Alex Kendelen who launched himself over the line to grab the lead for the first time in the game.

The hosts held on to the game and came out victorious winning by 18-13 to return to winning ways.

Munster now prepare for Castres in the Champions Cup this Friday evening and in the wake of the Ulster game, we look at the talking points ahead of the European clash.

Munster youth shines through to secure the win

Seven of the hosts starting XV were under 25-years-old showing the promising future that Munster has with the current team. The Munster youth are really beginning to strut their stuff, highlighting a new wave of talent that’s coming through.

Craig Casey, who is just 22, is already showing glimpses of Ireland and Munster legend Peter Stringer’s talent. Casey has multiple Irish caps and at the weekend he controlled the game incredibly wellquickly maturing into a real world class talent.

Try scorer Alex Kendellen got called into the squad very late and grasped this game with both hands. The academy player undoubtedly will be looking for the call-up again this week in their game against Castres after his try scoring exploits.

That pair alongside the likes of Crowley, the Wycherleys, Thomas Ahern and Gavin Coombes can help Munster to once again become a genuine threat in the rugby world.

Last week at The Sportsground Munster gave away 17 penalties. It was made clear by the team and the management that it was something that needed to be fixed.

As the old saying goes ‘Rome wasn’t built in a day’ so some indiscipline was to be expected.

However, to see Simon Zebo receiving a red card fora high tackle on Mike Lowry was definitely a disappointment for soon to be departing coach Johann Van Graan.

While some would argue that there was no malice intended, by the letter of the law, Zebo deserved his marching orders.

Outside of that, Munster again gave away more penalties than their opposition hitting double figures with 10. It is stats like these that help separate European’s elite from Munster.

What next for Munster?

Looking to the weekend, Munster face Castres in France in the Champions cup this Friday at 8pm Irish time. Judging by the squad updates it looks like they will look to their youth team again to fill the ranks.

Senior players Peter O’Mahony and Jean Kleyn have returned to training this week and they could add the missing composure and enforcement needed to get this team in action.

Damian de Allende suffered an abdominal injury at the weekend and his availability will be determined later in the week. His absence would be huge for Munster as he guided the ship in previous rounds.

Less than a month ago Munster beat Castres in Thomond Park 19-13 and they will be keen to replicate this on Friday and make it three from three in Europe this season.

The post Talking Points | Youth shines through, indiscipline and Castres on the horizon as Munster refocus for Europe after Ulster win appeared first on Sporting Limerick.