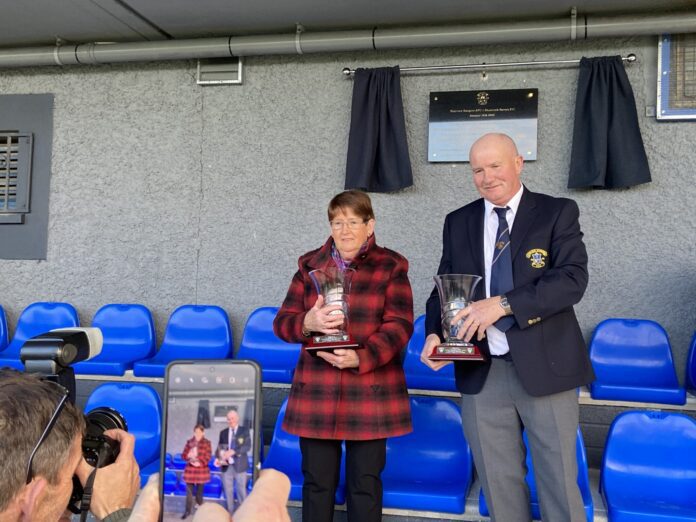 FAIRVIEW Rangers officially unveiled the development of the club’s Fairgreen base on Saturday afternoon and marked the occasion by playing Airtricity League champions Shamrock Rovers in a friendly game.

Furthermore, the club honoured former Chairman and the late Eamonn Heffernan and former FAI Junior Cup winning manager Dermot Finnan for their longevity and great service to the club over a number of decades.

The duo had both families present as they were given the honour of unveiling the plaque for the first time to mark the occasion. In most recent times, Heffernan and Finnan had spearheaded the club through unprecedented success as they won 6 FAI Junior Cups as Chairman and manager in the late 1990’s and early 2000’s as well as winning league and Munster Junior Cup titles.

However, it was perhaps their commitment to the cause behind the scenes and in harder times that was most admirable. Both Eamonn’s sons Barry and Colm were huge players for Finnan during the club’s successful period. Dermot is still very much an active club member and was part of the re-development project.

The club were delighted to showcase their new facilities on the day including a new seated stand, new floodlights which were in use and new dugouts. The pitch was also in great condition as it always is and there was a big crowd present to witness a 0-1 Shamrock Rovers win through a late Danny Mandriou goal.

Fairview certainly put it up to their illustrious opponents and came close on four occasions over the 90 minutes. Conor Coughlan’s early volley looked destined for the net but Corey O’Sullivan produced a great block.

Shane Duggan was enjoying playing against a League of Ireland outfit again and a superb piece of skill allowed him space to shoot but it went over the bar. Substitute AJ Moloney gave Sean Hoare and Lee Grace a tough time and produced saves from Leon Pohls.

Of course, Shamrock Rovers brought a strong squad to the game as they are preparing for a new League of Ireland season and went close on two occasions through Richie Towell and Irish international Jack Byrne before Mandriou slammed home from close range to grant them victory in the final minutes.