THE first University of Limerick students to attend classes at the university’s City Centre Campus began a new educational journey this morning.

New teaching spaces and a presentation area, as well as a Citizens’ Innovation Lab which is a joint initiative with Limerick City and County Council, have been developed in the existing building.

A section of the building has been retrofitted for use in the short term, while a longer-term master plan for the site is developed, which will lead to thousands of students using the campus.

Professor Mey said the university wanted to create state of the art learning, research and engagement facilities at the City Centre Campus.

“The longer term vision for the existing building and site will be developed to a world class standard, while being sensitive to sustainability – and we will do that with our partners in Limerick City and County Council, communities, businesses and industry.

“The idea is that this would be developed into a commercial and community public space and I am delighted that we are already hosting a Citizen Engagement and Innovation lab with the Council that shows the potential for the site and for collaboration with our partners.

“With our student numbers set to increase due to demographic growth, we want to have a sizeable portion of them based at this facility in the heart of our city. Town and gown are finally coming together at this new location and we are delighted about that,” she added.

Mayor Butler said it was a hugely significant day not just for the university but also for the city centre.

“The location of the campus is on a prime site, visible from all angles and from all directions. We want the UL City Centre Campus to be a beacon for people. Working with the University into the future, we want a campus that is striking in its architecture, a place that nurtures innovation and fosters creativity.

“With such a prominent and prestigious site along the River Shannon, it is incumbent on both the University and the local authority to work together to create a campus that Limerick deserves,” Mayor Butler added.

Initial works to prepare a portion of the internal space on the first floor of the building have been ongoing since July of last year.

As part of the internal works during this initial phase, a new access lift and ramp have been built at the Sarsfield Street entrance, new doors installed and an area of the first floor has been fully refurbished. 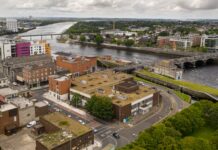 From Limerick’s Milk Market to the Maracana 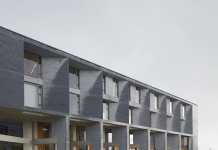