FOUR-year-old Noah Quish from Monaleen is “known to gardaí” – but for all the right reasons.

The Limerick force know him as their ‘little blue hero’ after he was made an honorary Garda two years ago and presented with a mini patrol car by the boys and girls in blue.

But despite loving his Garda ‘duties’, little Noah is battling huge health issues and needs, among other things, to go to Boston in the USA for speech therapy and help with swallowing food.

To support his family in meeting the ever mounting bills for Noah’s needs, a team of 65 gardaí and Garda staff will be taking part in the Great Limerick Run on May 1 to raise funds for their special young colleague.

Noah has to be fed through a tube, has had heart surgery, is facing brain and spinal surgery and needs ongoing treatment for numerous issues.

“He’s going to start school in September in St Gabriel’s Special School in Dooradoyle, but he doesn’t speak so he needs very intensive therapy before that,” his mother, Una O’Donnell told the Limerick Post.

“ We’re hoping to get him to Boston for a six week intense programme to help with his feeding and speech. Noah would have the use of vital stem therapy there which you can’t get anywhere else and this would help encourage the muscles in his throat to help him swallow,” said Una.

The little fighter also needs a special bed and a wheelchair which the family will have to provide for out of their own pockets.

Garda Martin Hennessy has set up a GoFundMe account. He had planned to do the run with colleagues two years ago but it was cancelled when Covid hit.

He explained: “Noah continues to need long term care as his conditions are lifelong. He requires a lot of therapy and intervention. His medical folder gets bigger with every visit as he always gets a new diagnosis.”

Donations to support Noah and his Garda colleagues on the run can be made at the GoFundMe page, ‘Limerick Run for Noah’. 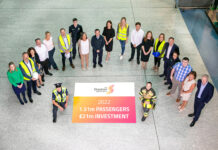