HISTORIANS at Mary Immaculate College (MIC) have joined forces with Limerick City and County Council to explore how everyday life, teaching and learning continued – sometimes with difficulty – throughout the turbulent period of the Irish Revolution.

Produced as part of the Council’s Decade of Centenaries programme, ‘Studying Revolution’ collates primary source material to tell the story of how staff and students navigated the revolutionary period, and how the war quite literally arrived at the College gates.

Solely dedicated to teacher training and exclusively for female students at the time, MIC’s place in Limerick saw it become caught in the crossfire of the war.

Sr Frances McGrath’s diary of the July 1922 Siege of Limerick, which is replicated in Studying Revolution, gives a striking and emotional insight into the lives of citizens amid open street violence.

The diary, which is introduced by Marian Fogarty, recalls the rumoured ‘arrival of the big guns’, the emotional turmoil of the war raging around MIC and the penetration of off-course bullets through College buildings on a regular occurrence – with one staff member even struck and injured.

When not directly in the crossfire of the wars, MIC was a crossroads for different opinions and political support. In the memoirs of Catherine Daly, who studied at MIC from 1919-1921, we learn of the intertwining of the Irish Revolution in Limerick and her native Bantry with her studies.

This remarkable account blends the ordinary with the extraordinary as it weaves from memories of uncomfortable uniforms, sarcastic teachers and shopping for copybooks, to the shooting dead of an Gaeilge teacher, discreetly sharing news of ambushes with a politically sympathetic teacher and sitting alongside soldiers when a train was robbed by ‘the so and so Sinn Feiners’.

Dr Paul O’Brien introduces a letter from J.P. Goodbody, a businessman and politician, who lived at Summerville House, which is now part of the MIC Limerick campus. Goodbody’s letter to a Dublin friend, Mr. Brown, is written during near the midpoint of the Siege of Limerick.

“His account differs from that of Sr McGrath and he gives an interesting insight into the attempts to maintain operations at his mill while his supplies – both food and mechanical – are requisitioned by ‘Free Staters’ and ‘Republicans’. His observations point to conditions faced by ordinary citizens who were short of food and under curfew. 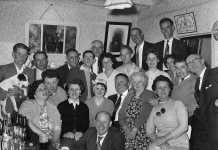